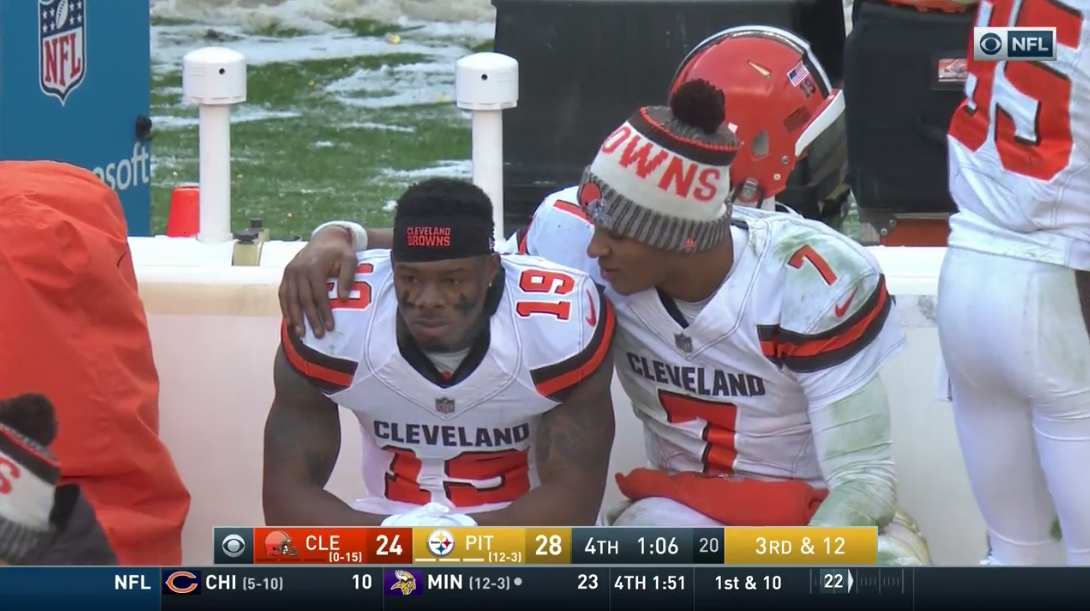 0-16.  Oh and fucking sixteen.  This past Sunday was the worst Sports related event in my lifetime.  What happened is exactly what I did NOT want to happen.  The Browns played the Steelers hard, as Brown, Bell, and Ben did not suit up.  The Browns were driving late in the 4th quarter to take the lead.  It was 28-24 Steelers with under 2 minutes left to play.  Kizer was leading a march into Steeler territory, where they found themselves a 4th and 2 from the Pittsburgh 27.  After a timeout the Browns shockingly drew up a play that left Corey Coleman WIDE OPEN for an easy first down, and probably a touchdown.  The ball went right through his hands ending the game.

Again, not much to analyze.  They lost.  Again.  You try to prepare for 0-16, but never really can.  The pain, anger, and sadness felt once the game was over just can’t compare to anything I’ve felt sports.  I hope to look at back at this season one day, and be able to smile.  I highly doubt it I’m afraid.  The Browns secured the #1 overall, pick and #4 overall pick with a Texans loss on Sunday.  Great!  There isn’t a QB worth my morning shit coming out of College.  Great, just fucking great.  They’re going to pick some bag of milk like Sam Darnold, Josh Rosen, or Josh Allen (? No idea if that’s even his name). Anyone watch Darnold on Saturday? WOOF.

I am not going predict who they take, or even give you some BS as to who they should take. Whoever they pick better be properly developed, and the team built around him.  Godspeed whatever poor bastard gets chosen.

Unfortunately, it looks like it will come down to Sam Darnold or Josh Rosen.  Leader in the clubhouse seems to be Sam Darnold, simply because there isn’t rumblings of him having a swollen camel toe like our man at UCLA, Josh Rosen (What a pussy).

Josh Rosen would hesitate to declare for the NFL draft if the Browns plan to take him at No. 1, per @AdamSchefter pic.twitter.com/Ife50caPt7

Again, what a pussy.  Look dude, part of being drafted high is the fact that 90% of the teams suck.  It’s nothing new guy.  He apparently would prefer a more stable frachise in the New York Giants.  Yeah Josh, the Giants are a real model Franchise right now, huh? 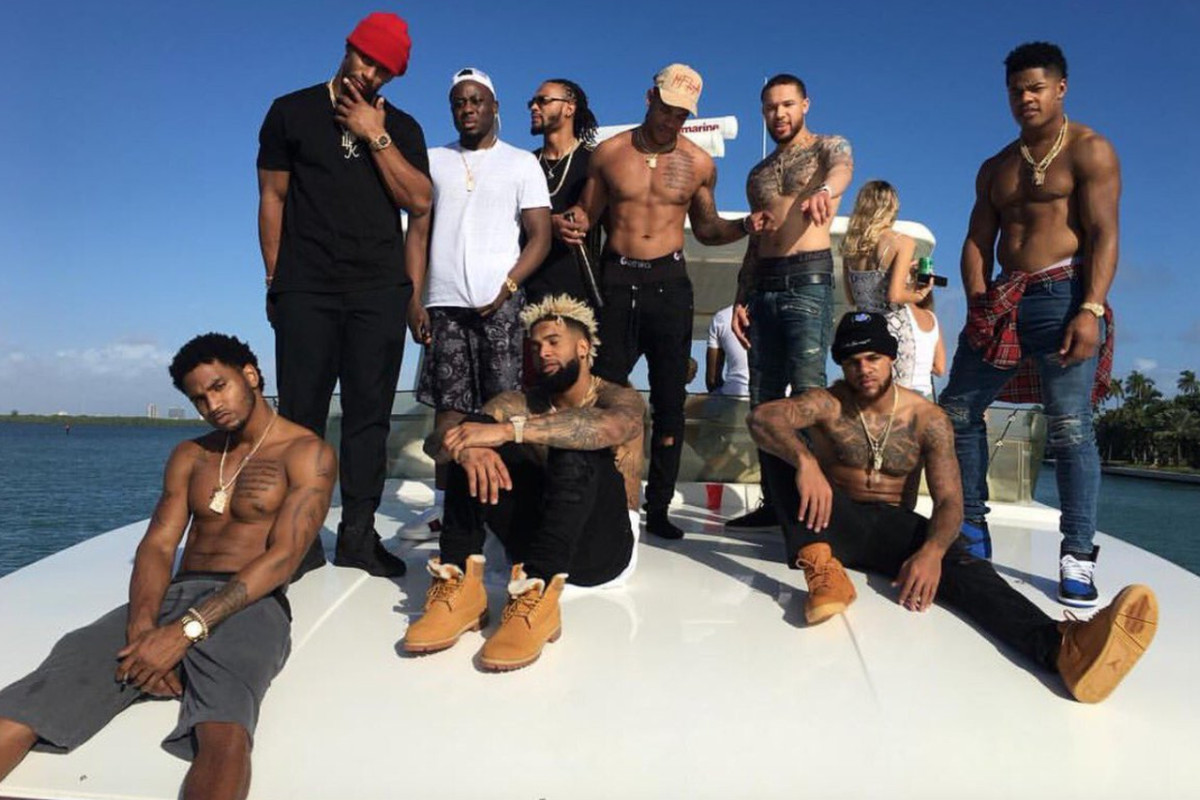 Despite Rosen apparently being a massive loser, he does have OK numbers:

Solid enough numbers that’s for damn sure, but UCLA sucks in a garbage Conference.

Darnold has put up similar numbers:

Not much there, but Darnold has 387 more passing yards than Rosen with 3 more interceptions.  Overall, the numbers are eerily similar.  There is one stat that stands out to me.  With the same exact numbers Rosen’s UCLA went 6-7 overall this season.  Darnold lead USC to 11-3. So, I guess it will come down to which player is less of a pussy?  Which ever one declares, and open about being ok with going to Cleveland will be picked.

Sam Darnold is asked how he’d look in a Browns uniform: “Whenever I come out for the NFL, I’d be honored to play for any team.”

So, everything really hinges on whether or not he will come out.  Who knows if he will.  I don’t follow College Football closely, especially Schools on the West Coast.  Hopefully does so we can take him #1 overall, and get this thing going.  If not, take some other QB (Baker Mayfield, Rosen, Allen).  Either way, no dicking around with the QB position this year.  Pick a guy, and direction for fucks sake.

Finally, to coaching.  Hue Jackson.  Wow.  I have never hated someone as much as Hue.  Hue came out, and blamed all of the players for this 0-16 campaign as par for the course.   He spews nothing but incoherent bullshit.  He even had the balls to pat himself on the back for the job he did:

I felt a moment of sympathy for Hue Jackson, and then he legitimately said “I don’t think many people in the league could do this job” in regards to managing a winless football team

Job well done Hue, you vile weed.  He couldn’t be more wrong.  Is the team bad?  Yes!  Absolutely they suck, but they are not 0-16 suck.  How many games over the past 2 years should have been won had the team had half a clue? upwards to 10.  I hope soon his players completely turn on him, and trash him in the media.  He deserves it for constantly blaming them.  The players aren’t the ones who completely ruined DeShone Kizer.  Kizer is fucking good.  He has all the tools, ability, and toughness to be a starting QB in the NFL.  Had he been coached properly, they probably win against Green Bay, Indianapolis, Pittsburgh TWICE, Jacksonville, and Detroit.   DeShone had a rough year, but he is not as bad his stats would indicate.  There were a lot of boneheaded decisions, but not all were on him.

Hue refused to dial down the offense to acclimate a rookie QB.  Despite having arguably one of the worst Wide Receiving corps in league history, he’d still have Kizer chuck it up to JAG’s.  The Browns were in the top 10 in the league in passes attempted over 30 yards.  Inexcusable.  They refused to run the ball, or gave up half-way through games.

DeShone exhibited the ability to make plays with his legs this season, amassing 417 yards and 5 rushing touchdowns.  Solid.  Definitely a foundation to build on.  Poor kid was set up to fail. Say it with me again, “Fuck Hue Jackson”.  I hope they hold on to Kizer whether they go in for a Darnold/Rosen draft pick, or Cousins/Taylor free agent. 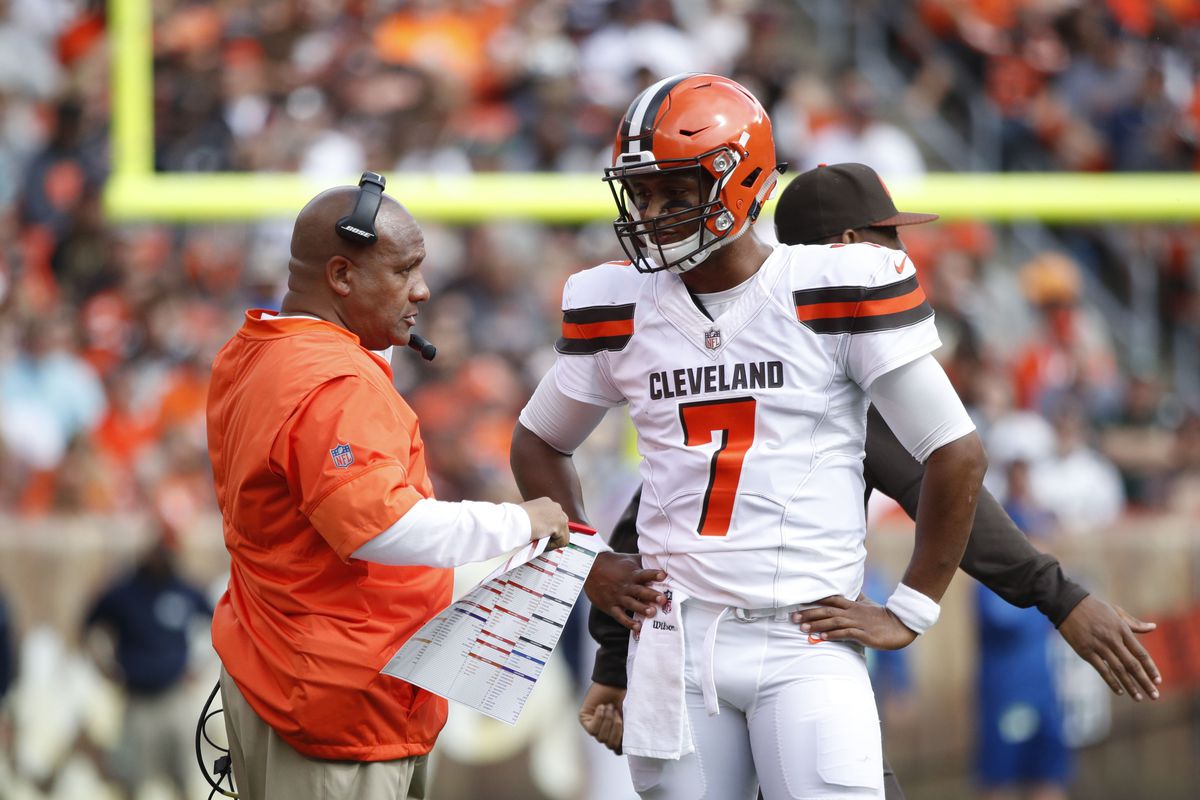 It is going to one hell of an off-season for the Browns.  Over $100 million in cap space to waste, and two top 5 draft picks. We’ll see how it goes.  Hopefully they don’t, “drop the ball” 😉