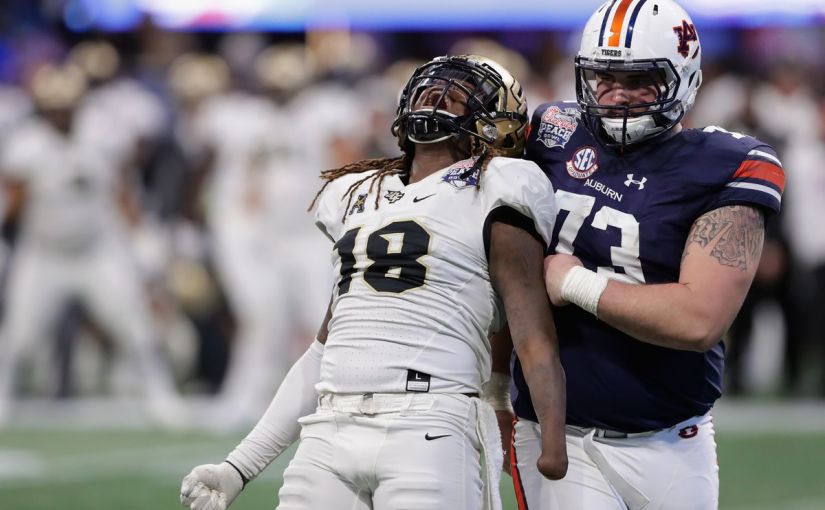 Two years ago, the UFC Knights were 0-12. Coach Scott Frost was hired and they are now crowned Peach Bowl champions after finishing a perfect season with a 34-27 win over Auburn. The American conference champions weren’t given a shot at the playoffs despite their perfect season, which is fine — the best opponent they played all season was Memphis. They came to play against Auburn though, who beat both Alabama & Georgia and came through with a victory.

“It was the right thing to do to come coach these guys,” Frost said, holding the game ball. “I’m not happy for me. I’m so happy for these guys.”

Frost, who has been confirmed as the next Nebraska coach, agreed with UCF to coach the last game and what an amazing way to go out. QB McKenzie Milton led the way with 242 yds and 2 TDs through the air. Though not outstandingly efficient, he added 116 yds and 1 TD on the ground which was huge for the Knights. Auburn almost was able to send it to overtime but a game-ending interception (set to Titanic music below) clinched it for UCF.

THERE IS AN UNBEATEN IN COLLEGE FOOTBALL!!! UCF FINISHES THE SEASON 13-0.

THEIR GAME CLINCHING INTERCEPTION TO BEAT AUBURN IS EVEN BETTER WITH TITANIC MUSIC!!! WHAT A SEASON FOR @UCF_FOOTBALL!!!!

Frost was quoted after the game as saying “it wasn’t right” for UCF to not be even mentioned in the playoff talk.

UCF is 13-0 after beating Auburn, but had no shot to compete for the National Championship. Every game counts, huh? Not so much. Scott Frost and UCF should’ve been in the playoff.

This is going to be the problem with college football is that nobody knows what to do with these teams that aren’t in the power 5 conferences. Would UCF have beaten any of the top 4 teams? It’s hard to say — did they deserve a shot? Well they just proved themselves on a pretty big stage. Obviously UCF will have a drop-off next year without coach Frost but I think something needs to be done to let these little schools have a chance at the big title. I’m sure the Knights are happy with their win and will enjoy being the only undefeated team in the playoff era but it would have been awesome to see if they would have been able to compete for a national title. Could be time for an 8 team playoff already.

PS – The Auburn pile-driver was my favorite thing from this season.

One thought on “UCF Completes Their Perfect Season and Beats Auburn”