Another Original Six franchise, another dumpster fire.  The New York Rangers have spent much of the past 15 years as Stanley Cup contenders.  Unlike the Blackhawks, the Rangers were never able to get it done. By that I mean win a cup, but that doesn’t mean they haven’t been a damn good team.

Since missing the playoffs on the final day of the 2009 season, the Rangers have been a force within the Metropolitan Division.  Even though they missed the postseason in 2009, the Rags have consistently made the postseason since the 2005 lockout.

In 2013-2014 the Rangers went on their deepest run.  The first round saw them beat their hated rivals, Philadelphia Flyers in 7 games.  The second round brought Sidney Crosby, and the Pittsburgh Penguins.  The Rangers won that series in 7 games as well, this time overcoming a 3-1 series deficit for the first time in team history.

In the Eastern Conference finals, the Rangers beat up on the hated Montreal Canadiens in 6 games, and the Cup final saw them take on the Los Angeles Kings. The Kings were in their second Cup Final in 3 seasons.

The Rangers would lose to the Kings in 5 games, with Alec Martinez scoring the winning goal in double OT.  Despite the Blueshirts going down in 5, 3 of 5 games went into overtime, and 4 of 5 were decided by one goal.

A big part of the Cup run was the King himself, Henrik Lundqvist.

The best Goaltender in the league has been manning the pipes on Madison Avenue since 2005-2006 season.  From the very beginning Hank was one of the best Goalies in the league.

It’s been nearly 13 full seasons in a Blueshirt for the King, as he approaches the 800 career games milestone.  He has a career 2.36 GAA, and 0.919 save percentage over his career, which is just insane.  Goalie is a position that is rapidly decreasing in value across the league, but Hank is still one of few true superstar Goalies.  Henrik’s play earned himself an 8 year $59.5 million dollar contract extension in 2013-2014.  Up until this season, he was the highest paid Goalie in the league.

It’s great to have a franchise goalie and all, but it has certainly hampered their ability to add to other places on the roster that would’ve had given them the extra piece to beat LA in 2014, or Tampa Bay in 2015, whom they lost to in the Eastern Conference Final.

Since the back-to-back runs, the Rangers have regressed.  Bad contracts, poor coaching, and the lack of game-breaking offensive talent have all contributed. 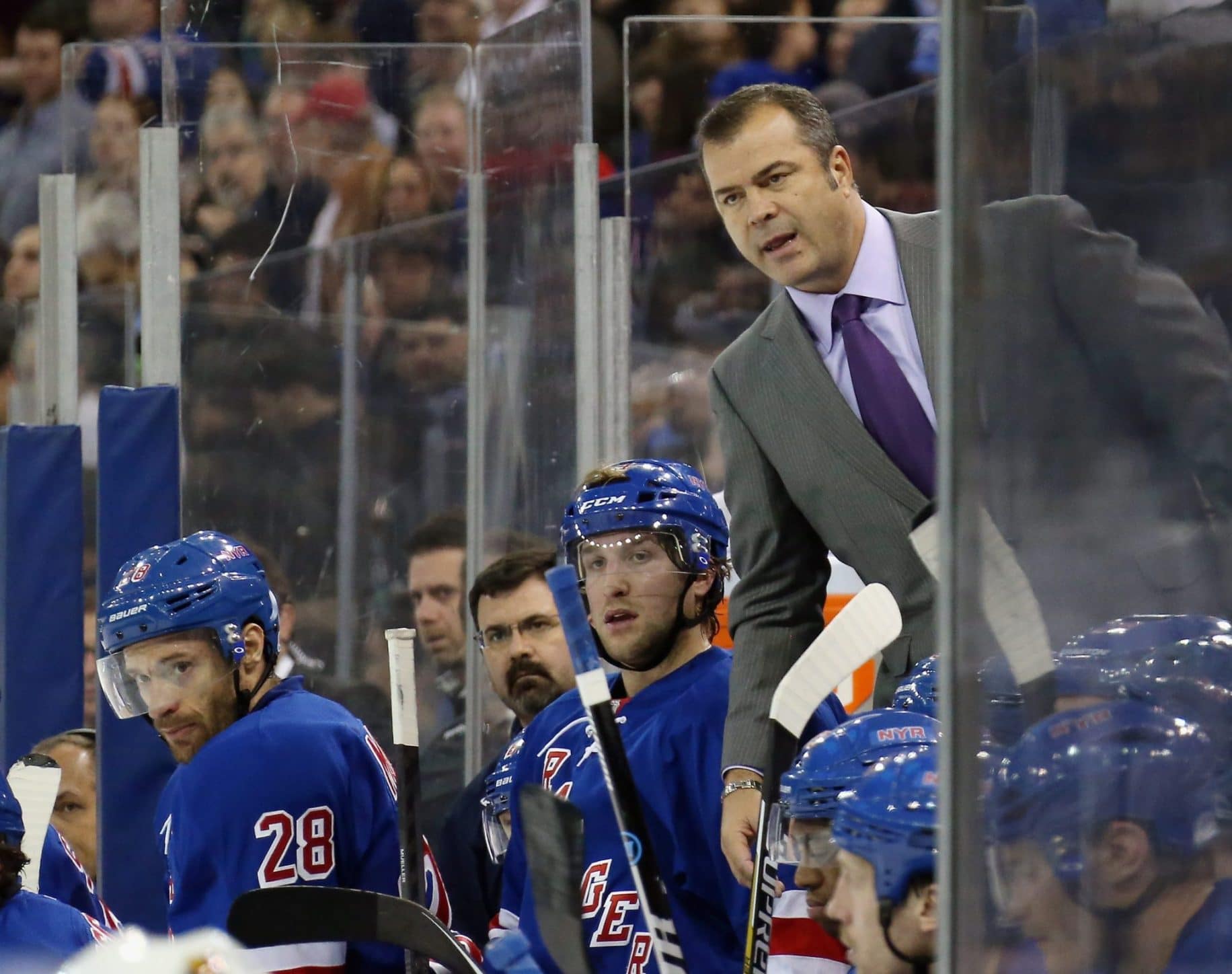 Alain Vignault has been coaching the Blueshirts since 2013, after John Tortorella was fired.  All was fine and dandy with AV until 2015-2016, where the Rangers were knocked out of the playoffs in the first round in 5 games by the Pittsburgh Penguins.  AV’s message was running stale, and he seemed to hamper the teams ability to get over the hump.  He fell in love with fourth line grinders like, Tanner Glass.   Glass is a fourth line fighter with zero hockey ability.  Hell, he’s not even a good fighter.  Yet he dressed in 66 and 57 games in back to back seasons.   Glass playing on the fourth line every night seems harmless, but it takes away ice-time from a guy like Pavel Buchnevich.  Buch is a young skilled forward, who has potential to be a goal scorer on either of your top lines.

Bad contracts and the New York Rangers go hand-in-hand.  Glen Sather and Jeff Gorton spent the better part of 5 seasons “going for it”.  They would spend big on high priced free agents like Brad Richards and Kevin Shattenkirk.  In the 2014 offseason Richards was bought out by the Rangers. This came just three seasons into his 9 year contract.  If they’re not signing guys to big money contracts, they’re trading for big guns.

In the past 7-8 seasons the Rangers have traded for Rick Nash, Keith Yandle, and Martin St. Louis in an attempt to “go for it”.  This all fine and dandy, but left the Rangers with a bare prospect pool, and no draft picks to replenish the pipeline.  They never really have game breaking talent.  They have quality offensive players in Mats Zuccarello, Mika Zibanejad, Vlad Namestnikov, and Ryan Spooner.  But they need a game changer.  A guy like Taylor Hall, Brad Marchand, Patrik Laine, or Austin Matthews.  Most importantly they need centers, which is position that they never truly addressed.  Right now Mika Zibanejad is their number 1 center.  He is probably best suited to play on the Wing, or second line center.  Asking him to be the number 1 is a stretch.

All of these factors lead us to the present.  The Rangers are dead last in the Metropolitan Division.  They are finally selling off expiring contracts, piling up prospects, and stacking up draft picks.  I would say this rebuild is 2 seasons too late, as I thought they should’ve started selling after the loss to Tampa in 2015.  The trades the Rangers have made so far (Rick Nash, Nick Holden, Ryan McDonagh, J.T. Miller) have yielded positive returns.  I am still shocked that they have not attempted to move Henrik Lundqvist.  He wouldn’t yield much in a trade simply because that’s the goalie trade market (maybe a low 1st/2nd round pick) but I would have looked to get him off the books.  The Ryan McDonagh trade yielded a positive return, but I would have looked to have moved Kevin Shattenkirk, whom they should’ve stayed away from in the first place.  McDonagh is a warrior who wore the “C” for many years.   He took a lot of punishment eating large minutes during deep playoff runs, but he is only 28 years old.  He still has plenty to play for.  Number 1 Defenseman is the hardest position to fill on your team.  While they may have gotten assets for him, I still would have looked to trade other pieces, even if it meant a lesser return.

We’ll see how this season unfolds for the Blueshirts.  They still remain somewhat close to the final Wild-Card spots in the Eastern Conference.  It’d probably behoove them to not even bother pushing to get the 8th seed, but as a fan I’d want my team to try and get into the post season.  I expect that they will address the coaching situation this off-season, and look to use all the picks acquired to bring in a bucket load of young talent.

Hopefully in the near future, the Rangers will be playing games into June.  But until then, Ranger fans can remember the good times here: