It only took the Tenessee Titans a few days for them to name Mike Vrabel as their new head coach.

The @Titans have reached a deal with Mike Vrabel (@CoachVrabel50) to become the team’s new head coach.

It was rumored that The Titans would possibly look at Patriots Offensive Coordinator Josh McDaniels, but it seems like he’s destined for Indianapolis. Hearing that news, the Titans jumped at the opportunity to hire Vrabel who had been with the Texans the past two seasons.

This is a good move — Vrabel played with the Patriots for the better part of a decade and was able to win multiple Super Bowls. He is a fiery guy who will take control of the organization almost immediately. 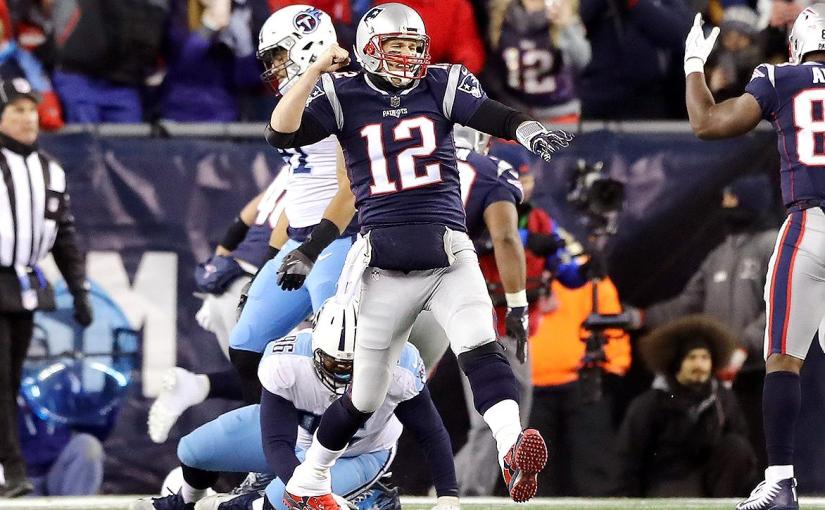 The Titans scored first and actually gave their fans a glimmer of hope that they’d be competitive and then the Patriots showed up. I’ll give credit where credit is due though — Corey Davis’ first TD of his young career was the first score of this game and was what we were hoping he’d be all here.

After that, well…it was all Patriots per usual. The Pats rode Brady’s 53 pass attempts en route to 35 straight points and an easy road win. James White added two TDs and the Pats allowed a garbage time TD to make the score 35-14, which honestly was not even that close.

Business as usual for the Pats as they’ll host the Jaguars next week at Gillette for a 7th straight appearance in the conference championship.

But at least we got to see Gronk and Amendola’s friendship go to the next level?

Fun stat of the night? Brady is 6-2 in the postseason when throwing 50+ times. In the Super Bowl era, all other QBs combined are 3-28.

Once again the Kansas City Chiefs failed to win a home playoff game.  Shocking, I know.  This time, the perennial losers gagged away a 21-3 halftime lead to Marcus Mariota, and the Tennessee Titans.  Even the Chiefs made themselves blush at the choke job that would ensue.

The game started out like a typical Wild-Card playoff game.  The home team had gotten out in front of the playoff newbie, Tennessee Titans.  Kareem Hunt capped off a 6 play 81 yard drive with a 1 yard touchdown run to make it 7-0 Chiefs.  After multiple three-and-outs from Tennessee, Alex Smith found Travis Kelce for a 13 yard touchdown to make it 14-0.  Smith was on fire, leading a 5 play 76 yard drive in just 3:24. 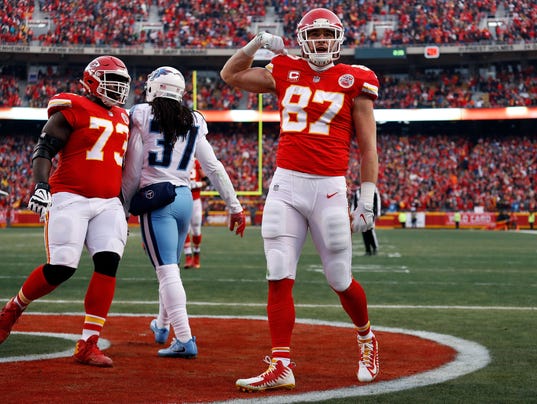 The Titans managed to cut into the lead before the half, making 14-3 with a Ryan Succop field goal.  Smith was having none of it, and lead a 9 play 79 yard drive for six.  Smith hit Demarcus Robinson for a 14 yard score.  21-3 Chiefs right before the half.  It looked as if the Chiefs home playoff curse would finally be erased.  21-3 was the score heading into half-time.

The second half started, and the tide would turn completely.  As the third quarter started, the feeling was that the Titans were on life support.  Marcus Mariota took over.  Prior to the game it had widely been mentioned that Mariota had regressed this season.  He turned the ball over frequently, while not making the kind of plays you would think a dual threat Quarterback can make.  Mariota stepped up BIG in this one.  To start the second half he lead a 15 play, 91 yard march towards pay-dirt.  Mariota would cap off the drive by throwing a six yard touchdown pass to……Marcus Mariota.

In all honesty, it was one of the coolest plays I have ever seen.  Mariota scrambled around the pocket like he was Fran Tarkenton re-incarnated.  As he rolled to his left he zipped a pass towards his receiver, Corey Davis.  The ball bounced off Chiefs Cornerback, Darrelle Revis directly back into the hands of Mariota.  Mariota corralled it, and took it to the pylon for 6.  The Titans took a whopping 8:29 off the clock, and cut the lead to 21-10.

In typical Kansas City Chief fashion, they proceeded to go three and out the following possession.   On 3rd and 1 from the KC 28, the Chiefs were stuffed on the most Chiefs play of all time.  They motioned about 7 guys pre-snap, and ran a Quarterback bootleg option which got fucking STUFFED for no gain.  3 and out, and the ball going back to the Titans.

The Titans would strike back on the ensuing possession.  Derek Henry rumbled his way 35 yards to cut the lead to 21-16.  The two point conversion attempt failed.

Take a look at #24 in red.  Darrelle Revis.  That’s a man, who doesn’t give a flying fuck.  It’s a goddamn shame that he is still a NFL player.  Wasted talent in a fucking mercenary, who won’t make play due to “business decisions”.  He’s a fucking sally.

The Chiefs would pick up one first down on their next possession, but stalled shortly after.  Another punt.  Mariota would take the rains, and lead another long march into Chief territory.  Finally, on the 11th play of their drive, Mariota hit Eric Decker for a 22 yard touchdown.  The score was 22-21 Titans, after they missed a second straight two point conversion attempt.

After stopping the Chiefs yet again, Titans put the game away with this final run by Derek Henry.

Look at No. 24 Darrelle Revis on Derrick Henry's game-clinching run. Gave up on the Chiefs most important play of the season. What an embarrassment. pic.twitter.com/k9B0oVeCfp

Man, just a master-piece from the Kansas City Chiefs.  I cannot believe I picked them to win?!  How stupid?!  The Kansas City Chiefs, are the Kansas City Chiefs.  Next year with Pat Mahomes don’t get sucked in.  Whether the QB is Trent Green, Alex Smith,  or Pat Mahomes they will always be the same.  Count on them to choke when it matters most.  Andy Reid is their coach after-all.  Count on Andy Reid to inexplicably not give the ball to key offensive weapons in playoff games.  This past game the NFL’s leading rusher, Kareem Hunt touched the ball only 11 times.  Andy Reid, man. So, next year in October when you get your rocks off to the Kansas City chiefs running over teams, just remember, they’ll limp dick in the playoffs.

I will admit — nobody really expected the Titans to be gearing up for a trip to Gillette Stadium this weekend. The Chiefs underachieved, sure but to lose to the Titans after being up 21-3? Crazy.

Early line for Divisional Round has the #Patriots -13.5 vs #Titans next Saturday 8:15pm in Foxboro #NFLPlayoffs

Two touchdowns for a divisional playoff game — and people will still bet on the Patriots. This just goes to show you how their dominance is overlooked at this point. Sure, the Titans don’t really scare anybody but they still went into Arrowhead, which is one of the harder places in the league to win (not in the playoffs though) and came back from an 18 point deficit. That being said, hammer the Patriots line. The Patriots last home game in the playoffs was a 19 point win against the Steelers — combo that with the ESPN headlines and all the negative talk? Patriots win this game by at least 3 TDs.

“Fate whispers to the warrior, ‘You cannot withstand the storm.’ The warrior whispers back, 'I am the storm.’” – Unknown