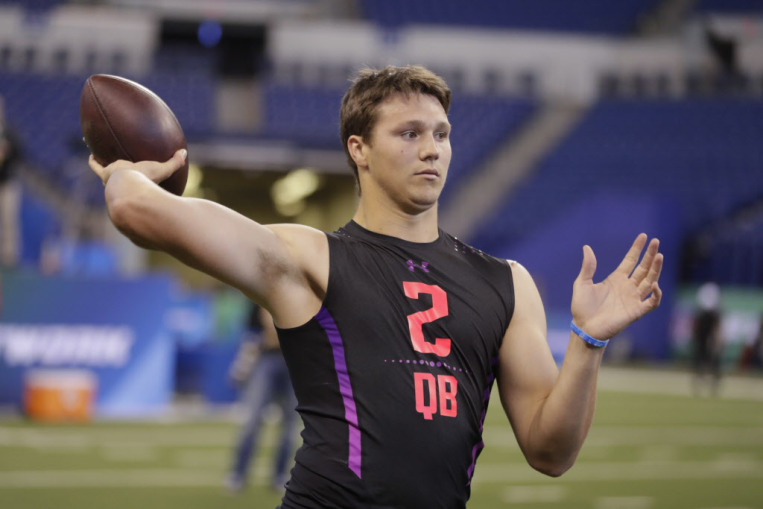 Silly season continues, as this past weekend has been the NFL Combine.  Prospects from all over this great land assembled in Indianapolis to do a bunch of meaningless drills, and interviews.  That brings us to our fourth Quarterback will most certainly be discussing as an option at first overall, or even fourth.

Out of all the options at Quarterback in the 2018 Draft Class, Josh Allen is down towards the bottom.  Why you ask?  Easy, there have been about 100 Josh Allen’s in past NFL Drafts.  First off, he’s a fucking monster standing at 6’4, 240 lbs.  Just a fucking linebacker playing QB.  These are obviously seen as positive traits. He is a guy who will be able to withstand NFL punishment.   Another talking point is his hands, big people have large hands, and Josh Allen’s hands are pretty big.  These are all contributing factors to this guys cannon of an arm. 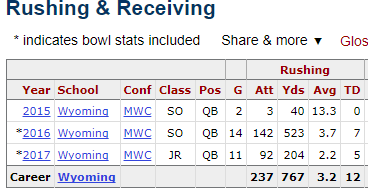 The career stats for Allen are as posted above.  The biggest takeaway: What the fuck happened this year?  I see a significant statistical drop-off in almost every major category in 2017.  He threw 12 less TD’s in 2017. He also declined in interceptions, which is obviously a good thing.  Just head scratching statistics.  This guy can throw it 90 fucking yards, but he averaged only 6.7 yards per attempt in 2017?  He is a surprisingly decent runner.  In 2016 he ran for 523 yards and 7 TD’s.  Again, those numbers plummeted in 2017, where he only rushed for 204 yards, and 5 TD’s.  For such a big body.

So, the kid has a good arm.  He can move around in the pocket ala Big Ben, should the Browns draft him to be the Quarterback of the future? ABSOLUTELY NOT.  First off, I hadn’t watched ANY of this kids games, because well I am not a Wyoming fan.  He is coming from that typical two-bit, punching Judy College offense.  The QB is hardly under center, and almost every fucking play is a run-pass option.  He hasn’t displayed the ability to take snaps under center consistently, at least from what I am seeing.  I watched that highlight tape (the first time I’ve watched Josh Allen) and I saw less than 10 snaps come from under center.  I saw a few bootlegs, but that’s about it.

Basically what I see when I watch this tape, is a big dude who relies on his natural arm strength.  He’s got accuracy issues that may not ever be fixed.  Doesn’t matter how far you throw it when you can’t hit the target.  But, Danny! What if the Browns develop him properly?!   We have a Josh Allen on the Roster already, and his name is DeShone Kizer.  Kizer is a a guy who is massive, has a rocket arm, can run, and has insane accuracy issues.   Kizer may never be fixed, which leads me to believe we wouldn’t be able to develop Allen in the first place.

For that reason, I am OUT on Josh Allen.  The question is, are the Browns out on him too?  I sure hope so…