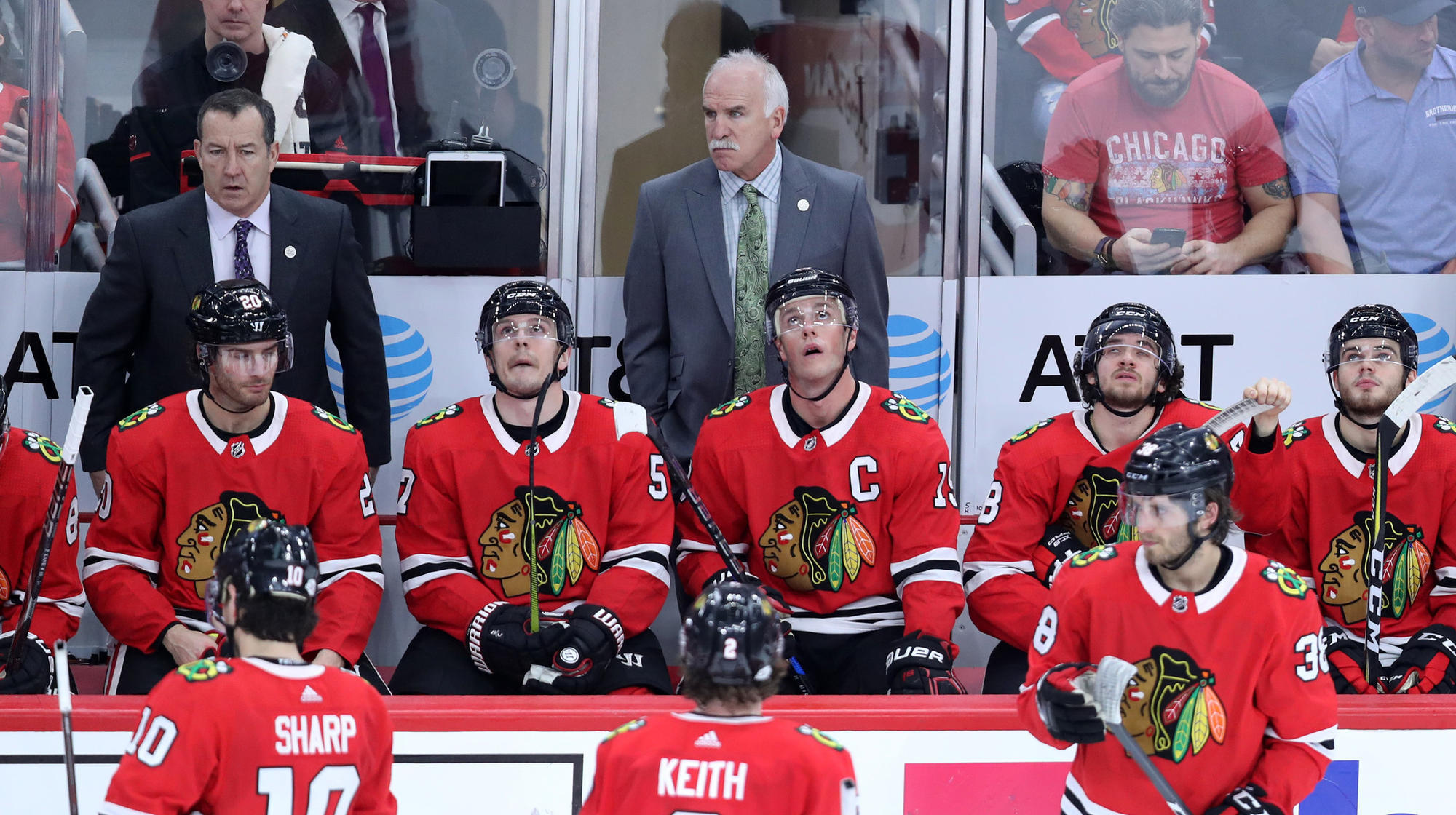 With the trade deadline come and gone, the NHL season is coming to a close.  By now the standings have pretty much been set, with teams grappling for the final playoff seeds.  This brings me to the Original Six.  Currently, there are just 2 Original Six teams sitting in playoff positions.  The Boston Bruins, and Toronto Maple Leafs sit in second, and third in the Atlantic Division respectively.   Both are young, fast, and poised to make deep runs in the postseason.

After those two, it is a disaster.  Old powers are starting to slip, as two Original Six franchises sit in last place in their respective divisions.  The biggest being the Chicago Blackhawks.

The above image is a familiar sight for Hawks fans.  They have won three Stanley Cups since 2010.  That’s right, three.  In the Salary Cap era this is unheard of.   To top it all off, the Blackhawks were coming off their darkest era in Franchise History.  From 2000-2009 nobody fucking cared about the Blackhawks.  They were not bad enough to draft highly rated prospects, and they toiled in mediocrity.  Finally they caught a break.  In 2006 the Hawks finished with the second worst record in the Western Conference.  This earned them the right to pick 3rd overall.  That selection was Jonathan Toews.  Toews has dawned the “C” while hoisting three Cups.

The following year the Hawks finished dead last in the Central Division, earning the right to pick first overall in the 2007 NHL Draft.  That selection turned into none other than Patrick Kane.

The foundation of Jonathan Toews, Patrick Kane, Duncan Keith, Brent Seabrook was built and ready to win Championships.  Win Championships they did, beating the Flyers, Bruins, and Lightning in the Cup Final.  After the first Cup the Hawks had to start locking up their core pieces long-term.  Jonathan Toews and Patrick Kane signed identical eight year $84 million dollar extensions in 2014.  Kane has lived up to this extension up until this point.  He is a top line winger, and one of the best pure goal scorers in the league.  When it’s all said and done, Kaner will be considered one of the best American Born players of all time.  Jonathan Toews on the other hand has not lived up to this massive extension.

Toews is a Center in the model of Anze Kopitar, Patrice Bergeron, or Aleksander Barkov.  He’s a two-way beast, who can score with the best of them.  Up until 2014 Toews was a 60-70 point player.  Since his massive extension his play  has dropped off.  2015-2016 saw him amass 58 points total, and he reached the same clip in 2016-2017.   He has not been playing at an elite level for two plus years, and that contract is just abysmal.  Not saying they should trade Toews, because besides number 1 Defenseman, number one Center is nearly as hard to find/replace.

While the Toews contract sucks, the biggest mistake the Hawks made was re-signing Brent Seabrook.  Seabrook was re-signed to a 8 year $55 million dollar contract extension in 2015.  Seabrook has been a regular on the Hawks Blueline since 2005-06 before Kane and Toews.  Seabrook was so valuable Blackhawks over the years.  Duncan Keith anchored the first d-pairing  with another shutdown Defeseman, and Seabrook would anchor the second pair.  The Hawks could mix and match pairs, and even pair the two together for a beast shutdown pairing.  Not to mention they had  Niklas Hjalmarsson, who would rotate between playing with Keith and Seabrook.

The worst part of his contract is, there are No Movement Clauses attached.  This means Seabrook can veto trades to teams not on a hand picked list of his choosing.  He has this no movement clause until 2022.  It’s contracts like the three highlighted above that put the Blackhawks where they are now.

Dead last place with aging core players,  bad contracts, and sub-par role players.  Every single season we see the Hawks trading away big pieces that they cannot afford to keep.  Brandon Saad was traded to Columbus after the 2015 Cup run for a younger Artemi Panarin, who exploded onto the scene as a premier young goal scorer alongside Patrick Kane.  This past summer saw the Blackhawks trade Panarin BACK to Columbus for…Brandon Saad.  Why did they make this trade?  Well, they couldn’t afford to keep Panarin any longer, and they hoped bringing Saad back would ignite Toews again.  Panarin continues to be a 60-70 point player, whereas Saad will be lucky to sniff 50 points this season.

So, how can the Hawks remedy their current situation?  This one is going to be difficult.  There are players that simply cannot be moved via trade, because of declining play, and shitty contracts.  Stan Bowman is going to have to move whatever pieces he can for draft picks.  In a Bruins type re-build on the fly, they need picks, picks, picks, and more picks.  Build around the core of players already there.  While they may be declining now, who’s to say Toews doesn’t bounce back?  Who’s to say Saad can’t recapture his goal scoring touch.  Start inserting more youth into lineup to to supplement the core.

They started off well by trading Ryan Hartman for a first round pick,  I’ll look for the Hawks to be active moving pieces for draft picks, and prospects this off-season.   Will this Original Six giant bounce back, or will they wilt into irrelevancy like the 2000-2008 Blackhawks?