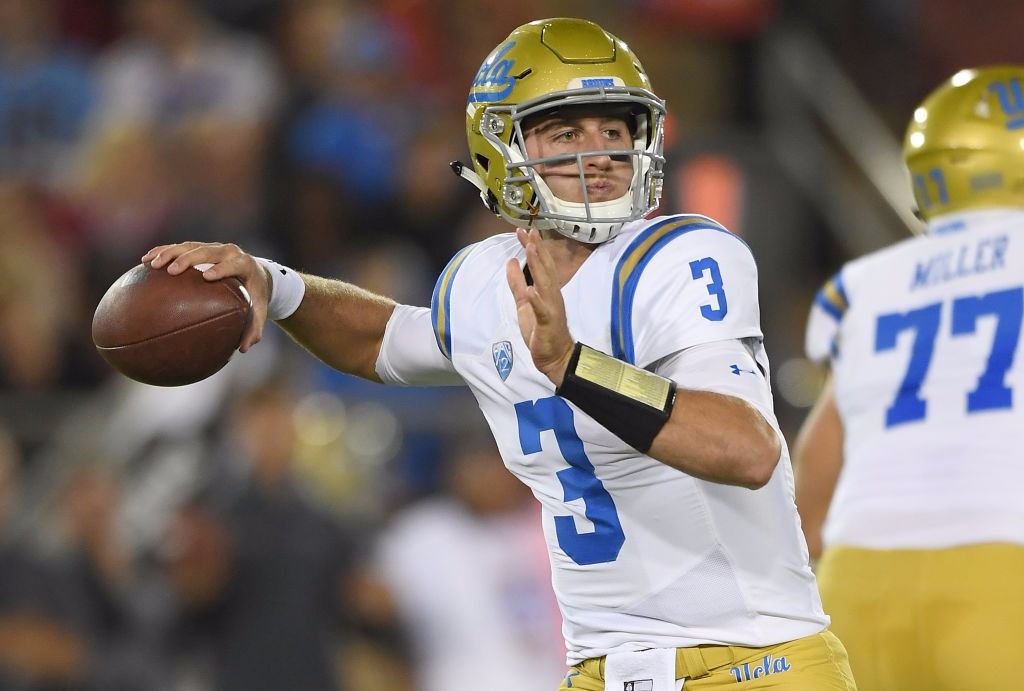 The last Quarterback on that should be on the Browns draft board this April is a man by the name, Rosen.  Josh Rosen was UCLA’s starting Quarterback for three seasons, before declaring for the draft this winter.  He is widely seen as the “most NFL Ready” prospect in this years draft class.  Let’s see what the hoop-la is all about.

This kid can definitely sling the rock a bit after watching the highlight tape.  When most of the so-called “experts” say he’s the most ready, I can certainly see what they’re talking about.  Rosen looks the sharpest out of any of the guys I’ve previously looked at.   The dude sets his feet, squares his shoulders to the the target, and lets it fly.  He is first and foremost, a pocket passer.   Unlike the majority of this years QB prospects, Rosen is not a dual threat.  Don’t expecting to see this dude hurdling would-be tacklers like Lamar Jackson, or scrambling around the pocket like Darnold.

Josh is all about standing from the pocket, reading the defense, and firing the ball.  The stats above reflect that.  His Freshman and Junior seasons he was able to play a full slate of games, whereas his Sophomore campaign was shortened to only 6 games due to a shoulder injury.  In each of his two full seasons he has thrown for over 3,000 yards.  While he did throw for 3,669 and 3,756 respectively, the 8.3 yards per attempt indicates he isn’t going to take risks with the ball.  Darnold is a guy who trusts his arm, and is willing to put it into coverage if he has to.  Rosen is less of a gunslinger in that sense.

Despite not being much of a runner, that doesn’t mean Rosen can’t move.  He demonstrates the ability to move laterally within the pocket, while keeping his eyes downfield.  In the NFL he won’t be given the time to move so freely in the pocket like the GIF below, but it is still a good trait to have.

The biggest gripe I have with this kid is his attitude.  It’s been well documented how he grew up in a well-off family blah blah blah.  He isn’t afraid to speak his mind, and not always about football.  He can be quite vocal about current events/politics.  None of that bothers me in the slightest.  Players absolutely 100% should be able to voice their opinions regarding a multitude of subjects.  It’s Rosen’s thoughts on football that crawl up my tail pipe.  It was widely reported by The Sporting News that Josh was using football more as an avenue to build his net worth.  Erik Galco explains, “According to sources who have spoken with people close to Rosen, he has been focused since high school on using football to make money and support the type of lifestyle he wants. He’s OK with challenging the system and being a mouthpiece for divisiveness because he appreciates the attention it draws”

What. A. Prick.  Look, it’s perfectly fine to express opinions and earn as much as you can.  Especially with how owners treat players, he should maximize his earning potential.  It’s the, “Mouthpiece for divisiveness……and attention it draws” with which I have a problem.  Basically, what that is telling me is Josh Rosen thinks he’s smarter than everyone else, and s willing to stir the pot.  That attitude simply will not work in Cleveland.  At times, Hue Jackson takes shots at players via the media.  How will this prick handle it?  It certainly sounds like he would fire back, causing all sorts of nonsense.

For those reasons, I am OUT.  I am set with Josh Rosen.  I just feel like his attitude and demeanor would not work on the Browns.  Seems like a bad fit.  When shit inevitably hits the fan, is this guy going to start calling everyone out?  Who knows.  I’d rather not find out.  In terms of Football, he is definitely the most complete Quarterback entering the Draft.  That being said, I don’t see as high a ceiling for him compared to the others.  His basement will be higher than the others, as he has better mechanics inside the pocket.  Basically what I am saying is, I see in Rosen having Alex Smith Potential.

I would hope come draft day, John Dorsey feels the same way.   I honestly have a strong belief that Dorsey will not select him.  Today we did get a hint as to whom the Browns were leaning towards:

April needs to get here soon.