The #Browns and WR Jarvis Landry are going to agree to terms on a 5-year, $75.5M extension, sources say. He gets $47M guaranteed… crazy for those who considered him a slot receiver.

Holy shit!  That is some serious dough being forked over by the Browns.  As soon as the trade went down the belief was that a deal would be done at some point.  It finally happened this morning, and Landry’s payoff is massive.

Jarvis Landry is 1 of 3 players w/at least 400 receptions over the last 4 season.

The top 2 guys, Antonio Brown & Julio Jones, have taken home at least $40M in that time, while Landry has been paid just under $3.5M throughout the time of his 4-yr rookie deal he signed in 2014. pic.twitter.com/OeusSP3A9q

A lot of chirping about this being an over payment, blah blah blah.  I don’t agree with that statement, but I also don’t disagree.  The guaranteed money, and term is a bit much in my opinion.  $47 million is the most guaranteed money any active receiver is making, but there is no debating the fact that he produces.  What do the Browns suck at ( I know  everything! HAHA)?  They suck at throwing, catching, and completing first downs to sustain drives.  Those drives eventually lead to points.  Jarvis is one of three receivers in the  to have at least 400 catches since 2014.  Not bad! 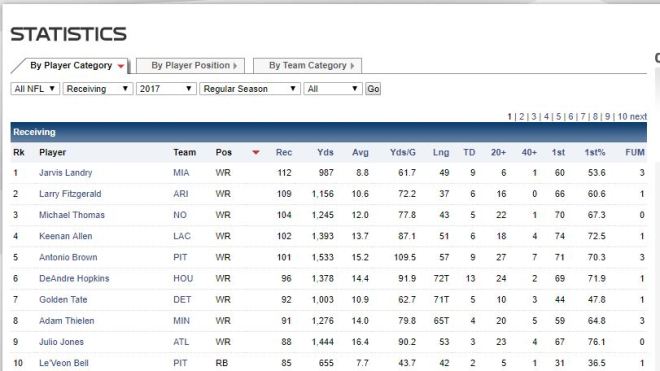 Jarvis lead the league in catches last year, and had 60 first down catches.  He catches the ball, and gets first downs at an exceptionally high rate.   That is something that sounds really fucking simple, but the Browns did not have a reliable guy in Landry’s mold pretty much ever.

Overall I like this move and have zero issue with overpaying.  The $15 million per year the Browns just shelled will drop their available cap to around $70 million. Boy that Landry contract is really putting us in cap hell!  Fuck outta here with that.

So far so good with Landry since coming over from Miami.  At first you feel bad for the guy, going from South Beach to Cleveland.    From 6-10 to 0-16 I figured he wouldn’t be too pleased, but he seems excited, and thrilled to be in Cleveland (Now I know the $75.5 million reasons why).  He’s even got the skill position players together to work out in the offseason.  Something we never see from the lowly Browns: