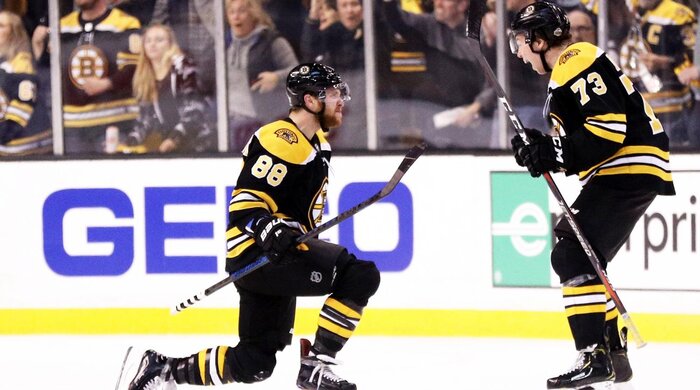 Just an ass kicking through and through.  The Boston Bruins opened up their first round match-up with the Toronto Maple Leaves on Thursday, and they came out with a convincing 5-1 win.  Saturday saw the B’s take the second game of the series 7-3.  They are now up two games to none in this best of 7 playoff series.  A lot has gone down since the Series began, so let’s get after it!

Game 1 saw the Bruins come out and assert themselves into the contest.  The previous 5 games to end the season the team had stalled.  They finally looked tired, and warn out from all the injuries.  They lost the number 1 seed in the Eastern Conference on the final day of the season, by losing to the Florida Panthers on the last day of the season.  Had they won the game, they’d be playing the New Jersey Devils.

Luckily for the Bruins, they finally began to roll out a fully healthy lineup for the first time in well over a month, and it showed.  They were the better team in Period One, they were hounding the offensive zone, and firing everything at Freddy Andersen.   Finally, leading a 3 on 2 attack, Torey Krug fed Brad Marchand behind the Leaves Defense.  Marchand took the feed, and slipped it past Andersen.  1-0 Bruins.

What an absolute beauty of a feed from Torey Krug, who is having a monster campaign.  The Toronto Defense is old and slow.  It really showed on this goal.  Roman Polak and Ron Hainsey were out on the ice together.  It doesn’t get much older and slower than those two.   The game stayed 1-0 for most of the period, but as it went along the Leaves really picked up their game.  Soon they were carrying the play.  Eventually, with just under 5 minutes left in the first, Zach Hyman tied the game at 1 for Toronto.

Bad pinch from Zdeno Chara in the Bruins offensive zone.  This sprung Hyman up the right wing side, and he was able to out-muscle Rask and McAvoy for the game tying goal.  The first period ended at 1-1, and Toronto had all the momentum.

The second period saw the Leaves continue to push the play.  They got the better chances, and forced the Bruins to take stupid penalties.  A couple of beautiful saves by Tuukka Rask, and missed empty netters kept the game at 1-1.  The intensity was raising with each passing second.  This is when Nazem Kadri did exactly what I had expected him to do:

Fucking rat.  Not sure what in the shit Kadri was doing here.  Wingles is on his knees, looking down at the puck, and Kadri takes a fucking run at him. This would give the Bruins a 5 minute Power Play, and eventually the game.  The stupid fuck is a 30 goal scorer, and he pulls a busch league move like this? Moronic. This may be the last memory of this series for Kadri, as the NHL Suspended him 3 games for the hit.

Kadri’s 3-game suspension leaves the Leafs with a big hole up the middle. https://t.co/dZti8qxYzD pic.twitter.com/V6vpR2upCI

From here on out the Bruins meticulously picked apart the Leaves, and their molasses D -corps.

David Backes proved to be a force in front of Andersen, as he parked his ass out front, and shoveled home a garbage goal to make it 2-1.

David Pastrnak ripped home a high-slot one-timer shortly after to make it 3-1 B’s:

Early in the third, David Pastrnak’s breakaway chance was blocked into the air by Freddy Andersen, and Sean Kuraly followed up the play to bunt the puck into the gaping cage.  4-1 Bruins.   David Krejci would slip a puck off the back of Andersen’s legs later on to make it 5-1, and that’s how game 1 would end.

Whata ya think of this one, @RedSox? pic.twitter.com/0IISFpwwzL 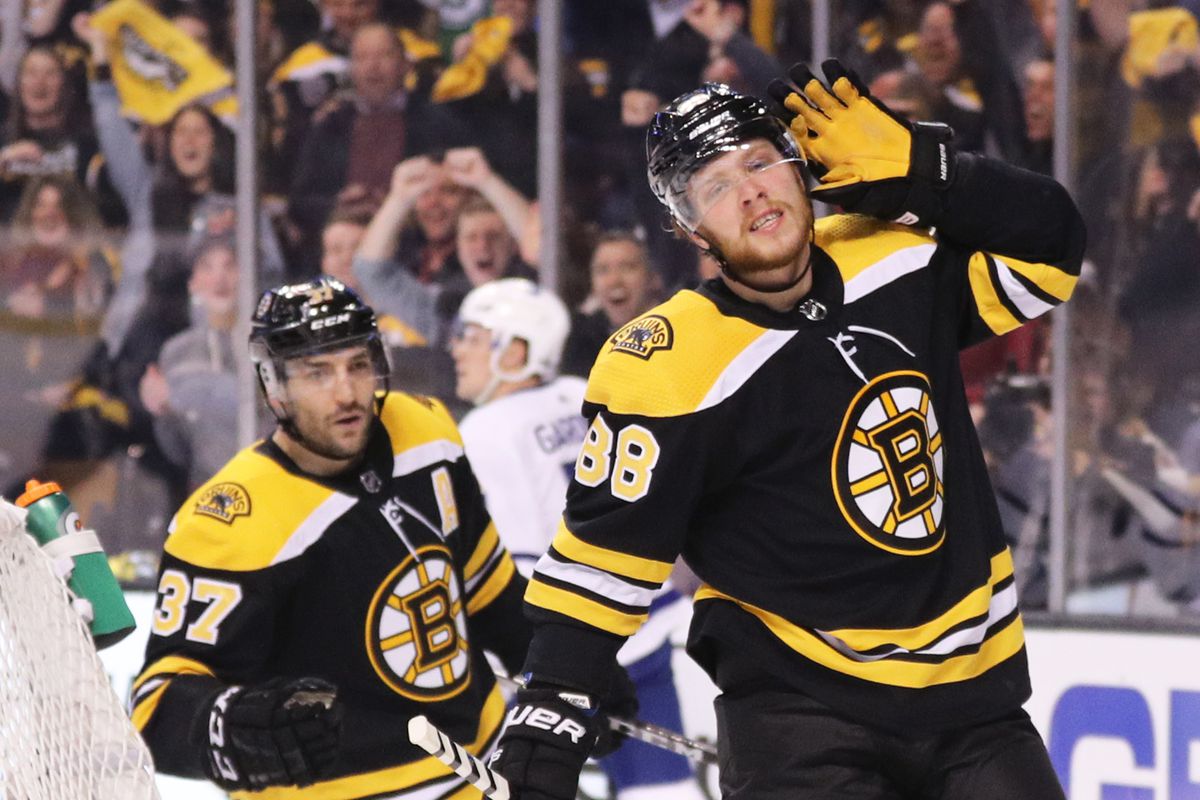 Game 2 on Saturday Night saw the Bruins continue to slap around the Maple Leaves.  Game 1 went of the rails for the Maple Leafs towards the end of the second period.  They were able to hem the Bruins in their own zone, and generate quality chances.  Game 2 this was not the case.  The Bruins took it to the Leaves en route to winning 7-3, and taking a 2-0 series lead.  The Maple Leafs were without Center, Nazem Kadri, and will be for an additional 2 games.  Kadri was suspended three games for his blindside hit to Tommy Wingles.

The first period started out a little uneasy for the Bruins.  The Leaves brought an initial surge to start the game, and the boys had to weather it.  Weather it they did, and just five minutes into the game David Pastrnak made it 1-0 Bruins.

Skill level off the fuckin charts here.  Pastrnak would not be done, as we’ll see here later on.  It was the goal the Bruins needed to break the will of the Leaves early on.  You could feel all the momentum tipping to Boston.

A few minutes later Jake DeBrusk notched his first career NHL Playoff goal.  Bit of a lucky bounce off a nice feed from Krug, and it was 2-0 Bruins.

#22 in White, Nikita Zaitsev.  Embarrassing effort my man.  The joke that is the Toronto Maple Leaves Defense corps continues to grow.  If Zaitsev’s nuts had dropped yet, he would not allow DeBrusk free standing room in front of his goalie’s cage.  Pathetic.  Just a few moments later, Kevan Miller decided he wanted to join the party.

AMERICAN SNIPER 2 STARRING KEVAN MILLER!!! COMING TO A THEATER NEAR YOU!!! 3-0 #NHLBRUINS pic.twitter.com/xwHSwn0m4Q

Lucky goal to get here.  See kids, flinging the puck to the net is never a bad thing.  Millsy just trying to generate some havoc in front throws the puck there, and it goes in.  Later on a Boston Power Play, Rick Nash added his first of playoffs doing exactly what Rick Nash does.  Parking his ass in front of the net.

Rick Nash's first of the #StanleyCup Playoffs.
The fourth of the period for the @NHLBruins.

What a start in Beantown. pic.twitter.com/jlTQY5tlj5

Mitch Marner added the Leaves first goal just 1:22 into the second period to make it 4-1, but David Krejci beautifully re-directed a David Pastrnak slap-pass to up the lead to 4 goals once again.

Deflection by David Krejci makes it 5-1 Bruins. Fourth point of the night for Pastrnak pic.twitter.com/KNu4knZ4ky

Tyler Bozak made it 4-2 before the end of the second period, but David Pastrnak decided it was time to ice the game.  Pastrnak scored twice in the third period capping off a natural hat-trick.  In between the two third period Pastrnak goals, James Van Riemsdyk added a third goal for the Leaves.  Final score in this one was 7-3 Bruins.

My sweet precious angel child David Pastrnak is having fun out there pic.twitter.com/gxd3crI6O4

Just a great way to start off the playoffs for the Bruins.  They come out and kick the shit out of a team that I thought would match-up better than it has so far.  Losing Nazem Kadri did not help their chances.  Kadri had 32 goals this year, and much like Brad Marchand, creates energy by being a fucking rat.   Bis loss  in the Leaves lineup.

Toronto’s Holy-Trinity hasn’t shown up AT ALL this series.  Mitch Marner has a goal and one assist, Nylander has none, and Matthews has none.  The best line in hockey (Marchand, Bergeron, Pastrnak) has amassed 20 points in two games by comparison.

WHAT A FUCKING SALLY.  Screw having to work harder, having to come up with a new game plan, or watching more film.  Shit happens, right golden boy?  That is a worrisome take if I am a Leaves fan going into game 3.  Now, he’s only in his second year, but man.  Your getting your ass beat to hell and back, and “shit happens” is your answer?  (I think I now hate Auston Matthews? What a fucking pussy).

Game 3 is tonight from Air Canada Centre in Toronto.  The Bruins look to take a commanding 3-0 series lead.  Riley Nash will be returning to the lineup after missing the last 1-2 weeks with a cut on his ear/concussion like symptoms.   Matt Grzelcyk is doubtful for the Bruins, and Nick Holden will replace him (brace yourselves). Leo Komarov will be out of the Leafs lineup with a lower body injury.