Well folks, the regular season is finally over, and the best tournament in sports commences.  The Stanley Cup playoffs began with a bang last evening with two Western Conference match-ups, and one in the East.  The Flyers got run out of Pittsburgh by Sidney Crosby 7-0.  The Winnipeg Jets won their first ever playoff game (The current version of the Jets) 3-2 over the Minnesota Wild, and Las Vegas squeaked past L.A. 1-0.  Tonight the Boston Bruins and Toronto Maple Leafs will commence their first round playoff match-up.

The Maple Leafs come into the series having finished third in the Atlantic Division:

All last season, and current season everyone has been hyping up the Toronto Maple Leafs.  A young, fast, skilled core of forwards is developing in front of everyone’s eyes.  Auston Matthews, Mitch Marner, and William Nylander have all been drafted and inserted into the Maple Leaf lineup within the past two seasons.  Auston Matthews being the most important of any of their forwards.  Matthews was drafted 1st overall in the 2016 NHL Draft.  From the very get go, he has been one of the league’s top players.  Not just young players, all players.  Hell, in his first NHL game he scored 4 fucking goals.  That is how good he is.

Mitch Marner was drafted 4th overall in 2015.  Seen as a flashy, undersized forward, there was a lot of speculation as to whether or not he would succeed at the NHL level.  Not only has he succeeded, he’s been a valuable goal scoring winger for Matthews.  In his two seasons, Marner has amassed 61 and 69 points respectively.  He has contributed since day 1, much like Matthews.

William Nylander was drafted 8th overall in 2014, and spent the following 2 seasons in the AHL.  He debuted last season with Marner and Matthews posting 61 points, and helping the leafs reach the playoffs for the first time since 2013.   This season saw Nylander pot 61 points again,  and his Leafs are in the Playoffs in back to back seasons for the first time since 2004-05, thus completing the “Holy Trinity” up in Toronto.  The Leafs looked to take a large step forward this year, and these three were able to do so.  Last year they squeaked into the playoffs as the second Wild Card team, and they were 8th and final seed.    This season they were within the 3 automatic playoff seeds for the duration of the campaign.  This means they will be facing the Boston Bruins, who finished 2nd in the Atlantic.  These two have been on a collision course all season.

The Bruins weren’t playoff favorites coming into the season.  They were inserting youth into the lineup in many places.  It just seemed like it would be a developmental type season.  The Bruins got off to a luke-warm start, as a rash of injuries hit the team.  Under .500 in November, Anton Khudobin saved the season out West.  The Bruins lost the first game in Anaheim on a massive three game California Road Trip.  The Bruins were able to beat both San Jose and L.A. in the following games.  At this point, the season took off.  They kept winning, and winning, and winning some more.  They went on an 18 game point streak that wasn’t snapped until January 30th.  This propelled them above the Leafs in the standings, and gave the 1st place Lightning a run for their money.  In the end, a push for first place was not meant to be.  The Bruins finished 1 point shy of Tampa to secure second place.

A lot has been said about the Leafs young guns, and rightfully so.  That trio lights you up for a lot of goals.  The Bruins have some pretty good youngsters themselves.  They might not be as flashy, but they all contributed to this teams surge up the standings.

Jake DeBrusk has been on the Bruins second line all year long.  It was his first full season in the NHL, after spending all of 2016-2017 in Providence.  That time has really paid off.  While he didn’t score 60 points, he was a solid contributor potting 43 points.  He rode shotgun with David Krejci for most of the year, but Cassidy is not afraid to sit his ass, or play him on a lower line if need be.  A lot to like from this kid, a bit of prime Nate Horton in his game.

Danton Heinen was an early season call-up from Providence when a rash of early season injuries hit the Bruins hard.  Heinen earned a spot on the third line full time shortly after.  Riley Nash, David Backes, and Danton Heinen has been the Bruins second best line when all parts are healthy.   Problem is, there has rarely been a time when all three are healthy.  The time they were, they went on their 18 game point streak.  Heinen was a major contributor offensively, grabbing 47 points in his first full season with Boston.  He’s creative with the puck on his stick, he can dangle, shoot, and pass at a high level.  Better yet, he’s able to play a physical game and win battles in the dirty the areas.  He will be an important piece moving forward for the B’s.  He’s got a lot of Loui Eriksson in his game.

Finally, the big one.  Charlie McAvoy.   The Bruins X factor.  Charlie was drafted in 2016 from Boston University, and made his NHL debut in the 2017 playoffs.  This first full season he continued to develop into a future number 1 Defenseman.  He missed a full month due to a MCL sprain, but still was able to notch 32 points in his Rookie Campaign.  He finished with a +20 +/- rating and averaged well over 20 minutes a night when healthy.  This kid is going to be the number 1 Defenseman here for a long ass time.

Recent history does not bode well for the Boston Bruins when it comes to beating the Leafs.  They are 1-3 against Toronto this season, and 1-7 going back two seasons.  When it comes to dynamic, game-changing forwards the edge goes to the Leafs.  Along with the three kids they have, James Van Riemsdyk, Patrick Marleau, Zach Hyman,  Nazem Kadri, and Tyler Bozak.  These are all forwards who can score, and bring toughness.  Look for Kadri to turn himself into a villain this series.  Dudes a punk. 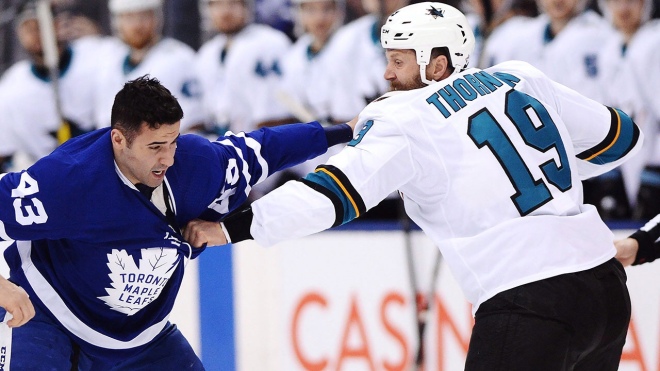 After the forwards, the Bruins have the just about edge everywhere else.  The Achilles heel for these Leafs is defense.  They have a top 10 bad D-corps.  Morgan Reilly and Jake Gardiner are there two best Defenseman.  They both can skate, and add offense to their game.  Those two will be eating up a lot of minutes for the Leafs.  After them it falls off.  They have veteran Ron Hainsey who is on his last legs.  He is not very mobile at all, and will mostly be used to block shots and kill penalties.  They have 31 year old Roman Polak, who is in the same mold as Hainsey.  He can’t skate whatsoever, but is gritty enough to block shots and kill penalties. The Bruins have the edge here with a solid balance of shutdown D-men, and puck movers.  The first pair features Zdeno Chara and Charlie McAvoy.  Despite being 41 Big Z still has plenty left in the tank, and is as good as ever Defensively.  He doesn’t contribute much offensively anymore, but he may surprise with a few clappers.  The second pairing features Torey Krug and Kevan Miller.  Miller has completely transformed his game in the past 2 seasons.  In 2015-2016 he was the team whipping boy.  He was injured for much of the campaign, and when he was healthy he sucked.  This season he is probably the second most valuable D-man on the team.  He allows Torey Krug the freedom to be more creative offensively.   Torey Krug is coming off his best regular season as Bruin posting 59 points.

As for the Goalies:

Frederik Andersen will be between the pipes for the Leafs and Tuukka Rask will man the cage for the Bruins.  I wouldn’t say either team has a distinct advantage in Goal, as their stats are almost identical.  Rask has a lower Goals Against Average (2.36), and Andersen has a highers Save Percentage (.918). I’ll give the edge to Rask and the Bruins, largely because Rask has lead the Bruins to the Cup Final in the past.

It was an optional pregame skate this morning, but Bruce Cassidy confirms the Game 1 lineup: