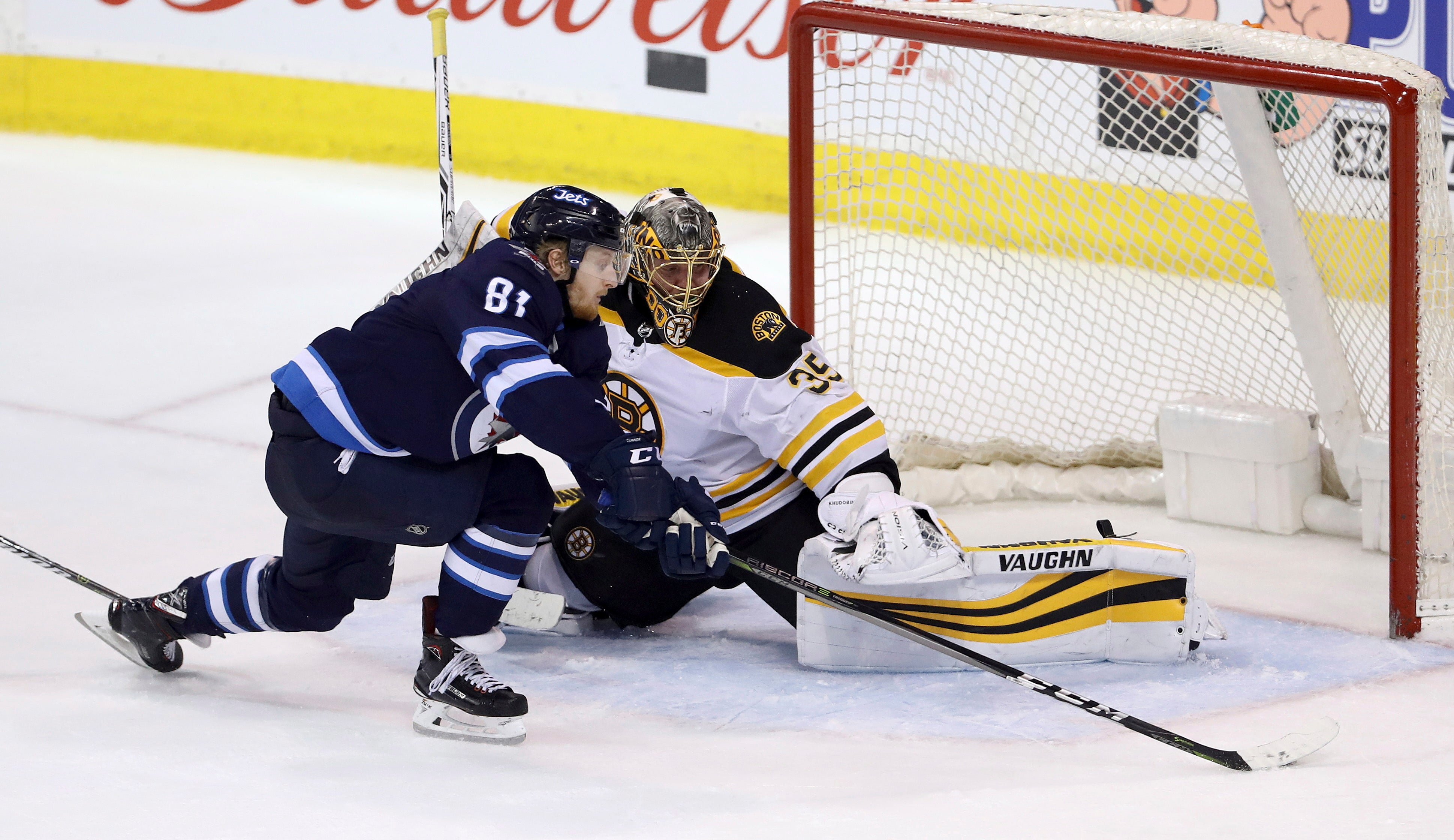 It was a spirited game last night in the Great White North.  The Bruins lost a barn burner 5-4 to the surging Winnipeg Jets in a shootout. A lot happened in this game, most of it wasn’t positive either. The Bruins got torched by the league video review center in Toronto, and lost another key player to injury.

Let’s start it off with the guys in Black and White.  They worked hard to earn the Jets first goal of the game.  Jet fourth liner, Brandon Tanev was banging the puck against Khudobin’s pad on a wrap around attempt.  Dobby held strong and the puck NEVER crossed the goal line completely.  For some unknown reason the Linesman patrolling the Blueline WAY away from the play, decided to call it a goal.  There is 0% chance a linesman standing at the Blueline or even Redline could clearly see if the puck went it.  The referee next to Khudobin called it no goal, but he was over ruled. Technically the original call on the ice was a good goal.

Close-up of that first Tanev goal. Ummm…🤔 Now I'm not so sure. You? pic.twitter.com/GBWRqZSPo6

To break it down simply:  1-Tanev was banging the puck on Dobby’s pad, and the ref with the best angle waived “No Goal”. 2-A linesman in no mans land overruled the referee, calling it a goal. 3- The play was reviewed, and the goal stood because there is no conclusive evidence that the puck stayed out. It’s also pretty clear it didn’t go in, as the ENTIRE puck has to cross the line. You must see white between the goal line and puck.

Here’s the debacle in Winnipeg. Initially called “no goal” by closest official, then overruled by official outside of the zone. Play challenged, review was inconclusive. Goal call on the ice stands pic.twitter.com/yFfU3gGxvW

The Bruins managed to keep their cool, and continue to play their game despite piss poor officiating. Later in the first period, the Bruins forechecking/tenacity really paid dividends.

What a goal by Ryan Donato #NHLBruins pic.twitter.com/IEZVDDGOyK

What a great play by all of those involved here.  Savy David Krejci pressured the Jets defender, won the puck inside the attacking blue line, and tapped the puck to a streaking Ryan Donato.  Donato undressed Joe Morrow with a forehand to backhand fake, and fired a backhanded seed top corner.  It was 1-1 in the final minute of the first period.

The second period saw the Jets take a 3-1 lead.  Brandon Tanev added his second of the game and ex-Bruin, Joe Morrow netted his 6th of season.  The story of this period came at the very end of it:

Breaking: brad marchand will have a hearing for josh morrisseys hit on matt grzelcyk pic.twitter.com/GeWqylmMRj

Josh Morrisey slammed Grzelcyk into from behind in a textbook cheap-shot.  Not only did he launch himself into the back of Grzelyck , he turtled like a fucking fairy when Kevan Miller wanted to rip his head off. The NHL is so focused on removing fighting from hockey that players never have to worry about standing up for themselves after taking a cheapshot.  Morrisey should’ve had the piss beaten out of him by multiple Bruins but the stripes got in the way. Morrisey received a 5 minute major penalty and a game misconduct.  This meant the Bruins would start the third period with a 5 minute power play.  Josh Morrisey will not receive any sort of discipline for his hit.  Why? Who the fuck knows.  It was a dirty hit plain and simple.  Matt Grzelyck has been diagnosed with an Upper-Body Injury, and there have not been many updates to that diagnosis.  It’s a shame he got run like that, because Gryz was having a great season, quietly molding himself into a key defender.  He plays power play, penalty kill, and 5 on 5.  The kid can skate, and has incredible passing vision.  He will be missed.

The Bruins managed to score twice on the 5 minute Power Play to start the third period. Danton Heinen and David Pastrnak each scored to tie the game at 3 with a mere 2 minutes gone in the third.

Danton Heinen cuts the lead to 1 on the PP #NHLBruins pic.twitter.com/T88YoGG4YE

Then, Nick Holden finally decided to show up.  It’s been almost a full month since the trade deadline, and Nick Holden was able to control himself for the most part:

While still on the Power Play from the Morrisey hit, Anton Khudobin was behind his own goal looking to stop a puck that was dumped in behind the net. Dobby fired it around the boards for Nick Holden at the hashmarks, and Nick Holden proceeded to handle the puck like a frag grenade. Winnipeg pounced on the loose puck, and scored short handed. Less than a minute after the tying goal from Pastrnak. The Bruins managed to secure another Power Play with about 13 minutes left to play, when Torey Krug stepped into a howitzer:

The two teams exchanged scoring chances for the remainder of the regulation, and overtime. The game would move on to a shootout.

Finally Patrik Laine ended the game by slipping a backhander through Khudobin’s pads:

Leave it to Laine to get the game winning shootout goal! @PatrikLaine29

Overall the Bruins battled hard against a team that’s just as good if not better. It’s a shame the game turned into a yard sale because of the officials, and someone like Matt Grzelcyk got hurt because of it. The officiating is still no excuse for the short handed goal that was given up in the third, or the other two legitimate goals the Jets scored.

Tune in on Thursday to watch the Bruins take on the Tampa Bay Lighting from TD Garden. Tampa has 106 points, and Boston has 105. Can the Bruins continue to slap around the Bolts? Let’s go Bruins! First place on the line!