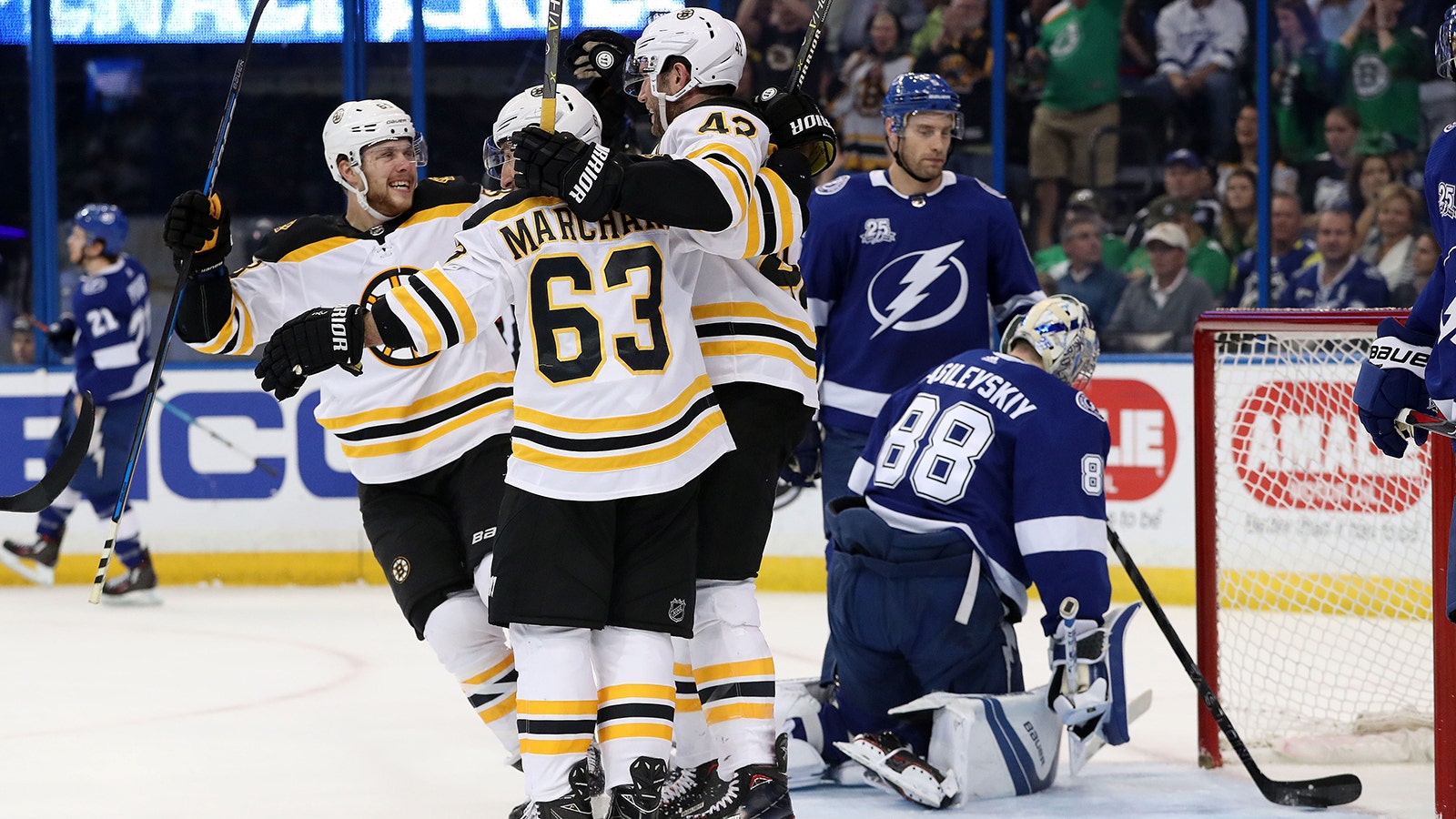 The Big Bad Lightning!  The Tampa Lightning, wire to wire have been the  the best team in the NHL.  They currently sit at 102 points, which is four ahead of the Bruins (98).  They added pieces such as J.T. Miller, and Ryan McDonagh at the trade deadline, and surely the up-start Bruins couldn’t keep up with Big Bad Lightning, right? Wrong.

Saturday saw the Bruins limp into Amalie Arena down Patrice Bergeron, Charlie McAvoy, Zdeno Chara, and Jake Debrusk.  Each one is a major piece to the puzzle for the 2018 Bruins.   DOES NOT MATTER.  The Bruins not only went to Tampa, and won, but they fucking emasculated the them.   3-0 final was the final.  With the win the Bruins move to just 4 points behind Tampa for first play in, well the NHL.  Personally, let Tampa have the Presidents Trophy.  This win just shows me how much more of a sound team the Bruins are than Tampa.

The game opened up with the Bruins hounding the Lightning all over the ice, despite being down so many key players.   Early on in the first period, Tory Krug fed a streaking David Pastrnak in the high slot.  Pastrnak took the puck to the cage, and shoveled a backhander around the pad of Andrei Vasilevskiy.

DAVID PASTRNAK SLIPS ONE HOME! 1-0 BRUINS OVER THE LIGHTNING! pic.twitter.com/56GdoCyRJF

Early on things were looking great for the Bruins as they completely hounded the Lightning.  The Bruins gave up chances to the Lightning, but for the first time in awhile Tuukka Rask was in the zone, and the Bruins depleted D Corps played the best game they’ve had as unit all season healthy, or otherwise.

Before leaving with an injury, David Backes made sure to leave his mark. #NHLBruins pic.twitter.com/Mu6XVKnUxA

Riley Nash makes it 3-0 #NHLBruins on the PP! pic.twitter.com/2Yr7Y2SHiL

The Bruins would coast home in the third to seal 3-0 win over the best the NHL has to offer.  The scoreline definitely could be higher, but the if I were Tampa I’d be embarrassed.  The Bruins are missing so many key players, and lost ANOTHER (David Backes) mid-game.  They allowed the Bruins to bully them.  You had guys like Kuraly, Acciari, and Schaller drilling the Tampa D behind their own net, which forces mistakes, and causes havoc.  Not only did the fourth line throw their body around, the whole team was finishing their checks.  Physically wearing down the best team in Hockey.

Tampa is too good to keep down for long, and Tampa certainly had their chances to get back into the game.  The Bruins Defense and Goaltending shut down Kucherov, Stamkos, Miller, Hedman, Johnson, Palat, and Killorn all night long.  I would not be overly optimistic with Saturday’s effort if I were a Bolts fan.

Tune into NESN tonight @ 7pm to catch the Bruins against the Columbus Blue Jackets.  The Jackets sit at 4th in the Metropolitan Division with 83 points.  They are currently locked into the first Playoff Wildcard seed.

The Bruins will have a new Rookie making his debut tonight:

Top Forward Prospect, Ryan Donato has signed a 2 year Rookie Contract with the Bruins.  Donato is the Bruins top forward prospect after shining at Harvard University for three seasons, and for Team USA at the 2018 Olympics.  Most kids sign their rookie contracts and spend 1-2 years in the AHL developing their game.  Donato is a special talent.  Special enough that Bruce Cassidy is inserting him to tonights lineup: