Here we go with the second Quarterback on my Rookie QB wish-list.  Sam Darnold from USC.  Darnold is coming off a 4,000 yard Sophomore campaign.  Coming into the year Darnold was seen as a unanimous #1 overall pick.  Both USC, and Darnold himself disappointed in 2017, but not bad enough to ruin his draft stock.  USC finished 11-2, and got waxed in the Cotton Bowl by Ohio State.

History has not been kind to USC Quarterbacks.  They are consistently pumped up as the next great thing, and it never pans out.  They are all seen as the (my favorite word!) prototype NFL signal caller. What is the prototype?  It’s a 6’4 225 pocket passer, who has a rocket arm.   All USC Quarterbacks fit that mold when their slinging the rock against the fucking Oregon State Beavers.

(Look even John David Booty made it to an SI cover)

In the NFL it is a different story.  More often than not, they amount to shit.  Occasionally, guys are able to carve out a decent career (Carson Palmer, Matt Cassel).

Lets take a brief look back at USC Quarterbacks past: 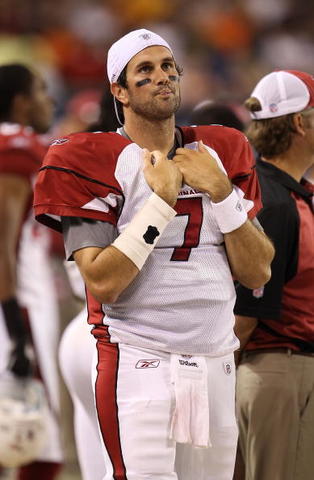 This guy straight sucked.  First of all this is nothing but pure bias on my part, but NEVER EVER take a lefty Quarterback.  He was one of those guys labeled the “prototype” NFL QB.  Problem is he threw like a Sally.  Leinart toiled around with the Texans, Raiders, and Bills before calling it quits. Another USC QB, another bust.  Barkley was regarded as a sure fire first round draft pick in 2011.  That didn’t stop him from returning to USC for his Senior season in 2012.  Big mistake.  Going into the year, Barkley was the unanimous number 1 pick with all the draft nerds, and leading Heisman trophy candidate.  His team was ranked #1 in the country to go along with it.  By years end USC had lost five games, Barkley had a shoulder injury that ended his season, and he had fallen out of the first round in draft projections.

Barkley was drafted by Philadelphia 98th overall in 2013,  and he never saw the field.  Philly traded him to Arizona in 2015, who cut him weeks later.  As a backup Matt got a few starts with Chicago in 2016, but still went 1-5.  He was on the Arizona Cardinals roster in 2017, but was inactive for all 16 games. 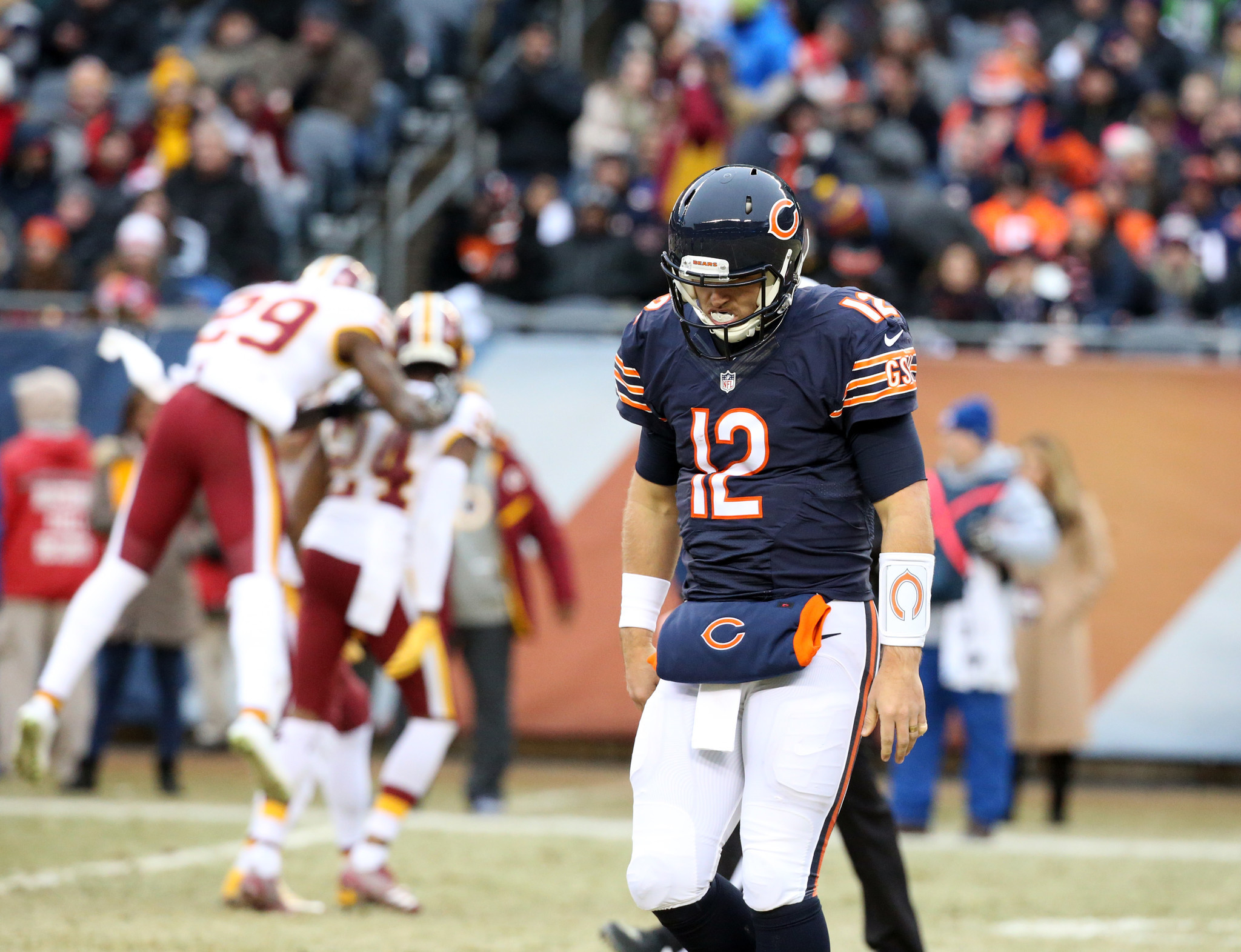 Ahhhhhh yes!  The Sanchize.  I remember it well.  Mark Sanchez came on to the scene with slightly less fanfare than the other two hacks.  However, in his draft year he soared up draft boards right behind the consensus #1 overall pick, Matt Stafford.  The Jets took Sanchez 5th overall after trading up with the Cleveland Browns.  Sanchez had an immediate impact.  The Jets went 9-7 and 11-5 his first two seasons as starter.  He even managed to take his team to the AFC Championship twice.  The kicker?  They beat the Patriots in Foxboro, in January.

It all went down hill from here for Marky Mark.  The Jets would miss the playoffs each of the following two seasons, and finally Sanchez was traded to the Philadelphia Eagles in 2015.  Since then, he’s been a journeyman backup.  He’s suited up for Denver, Dallas,, and Chicago.  I’m sure he will pop up in some camp this August.

These are the three most recent examples of over-hyped USC stiffs.  Carson Palmer gets an honorable mention, as his career turned out to be mediocre at best once he took that shot to the knee in the 2005 Wild-Card game against Pittsburgh.

Just goes to show you there is enough of a trend for me to have MAJOR doubts picking a highly rated USC Signal Caller.  However, there is something about Darnold that leads me to believe he could be the exception to the rule.  Of course, once again he is seen as the “Prototype” NFL QB.  The kid is a fucking Mack Truck standing at 6’4, 225lbs.  That will come in handy at the NFL for sure.  Darnold has a big arm, and he is not afraid to stand in the pocket and sling it.

A few things standout watching these two clips, Sam has some fuckin’ confidence in his arm, eh?  He is willing to stand in there, and fit the ball into tight windows to make plays.  At 2:05 of the second video, Sam is being pressured from the outside on a four man rush.  He is able to use his vision, and footwork to evade pressure, and he fires a missile to his receiver in the back of the endzone.  The throw at 2:05 seriously gave me a chubby for Darnold.

I also noticed that he is surprisingly good using his legs.  Not only can he move around the pocket to create throwing lanes, Darnold can take off and get chunks of yardage.  It also appeared like USC ran some designed QB running plays to get him into space.  He rushed for 332 yards and 7 touchdowns in his two years at USC.  Not bad all. 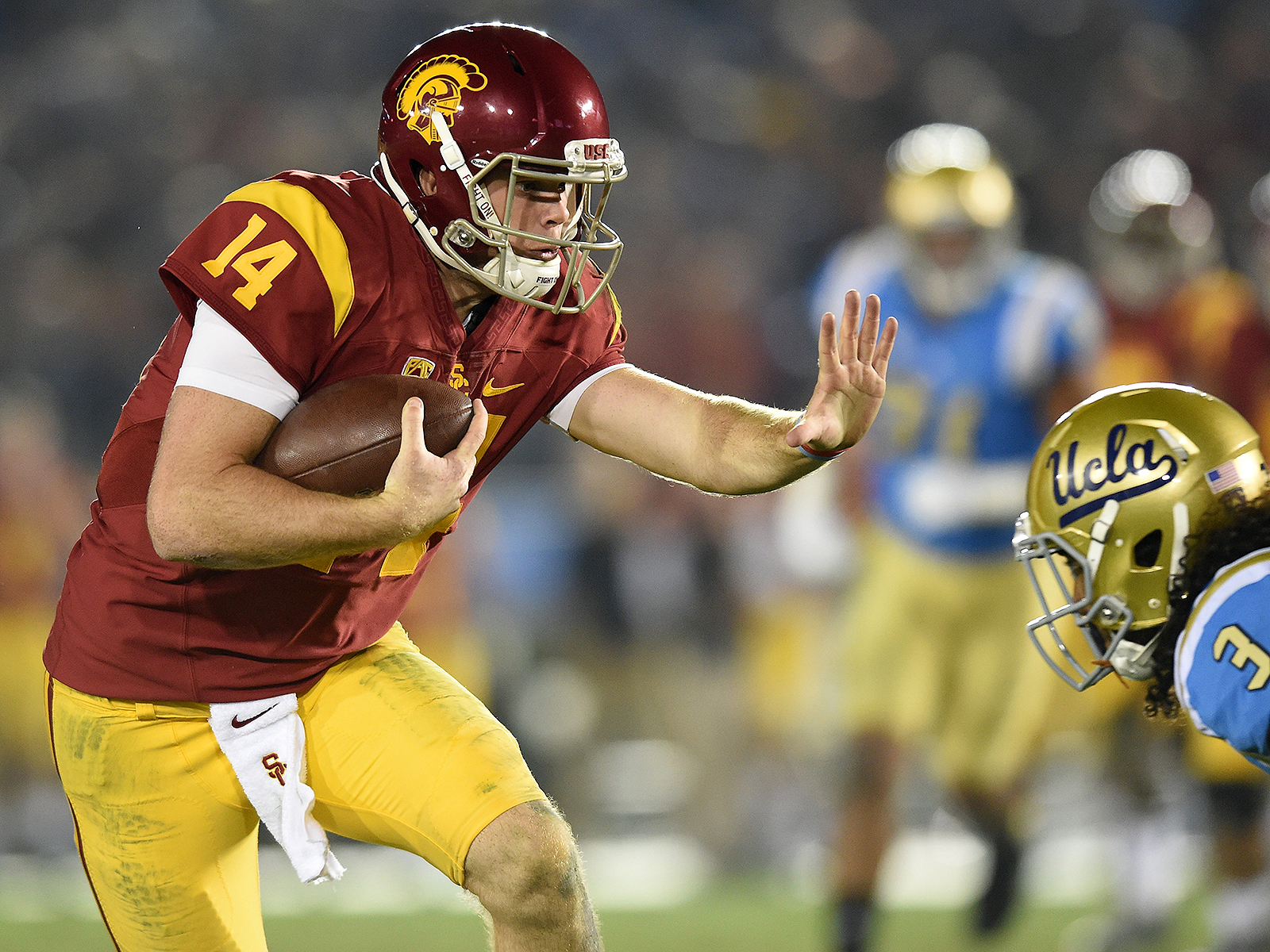 What I do definitively like about this kid, is his attitude.  There were reports that he would head back to Southern Cal for his Junior season simply to avoid the Browns.  That’s not the case obviously, as he and Josh Rosen declared for the draft this past January.   Seems like the kid has a good head on his shoulders, and it’s not lodged up his clam like Josh Rosen.  Rosen walks around with the stench of prick following him around.  Darnold is humbled, well spoken, and seen as a true leader by his teammates.  After-all, he does have the “C” on his jersey.

Will Dorsey and the gang find all this enough to grab Sam Darnold with the 1st or 4th pick in the draft?  We’ll see…