The NFL’s deadline for cutting rosters to the final 53 was Saturday by 4 pm EST.  Throughout the day, there were many moves made throughout the league.  This year was a bit different than normal as instead of breaking up the cuts throughout camp, there was one massive cut on the final day.  It actually made for many interesting trades, cuts, signings, etc.

The Browns were quite active the past week when it came to roster transactions.  Earlier in the week, they cut 2-time Pro-Bowl CB Joe Haden.  It was a move that surprised many outside the Browns.  Haden’s play had severely declined over the past two seasons with injuries hampering his ability to be a lockdown corner.  Gone are the days of him putting A.J. Green in a blender.  Throughout the preseason, Haden was getting roasted on a regular basis.  The Browns tried to trade him, but his contract made it impossible.   Haden signed a three year deal with the Steelers less than 24 hours later.

The very same day the Browns traded former first round pick Cameron Erving to the Kansas City Chiefs.  In return, the Browns received a 5th round draft pick in 2018.  Getting anything in return for Erving is a miracle — he may be one of the worst Offensive Lineman I have ever seen.  He was terrible at center and worse at the guard position.  It didn’t work out here, and the Browns finally moved on.  Take a look below. 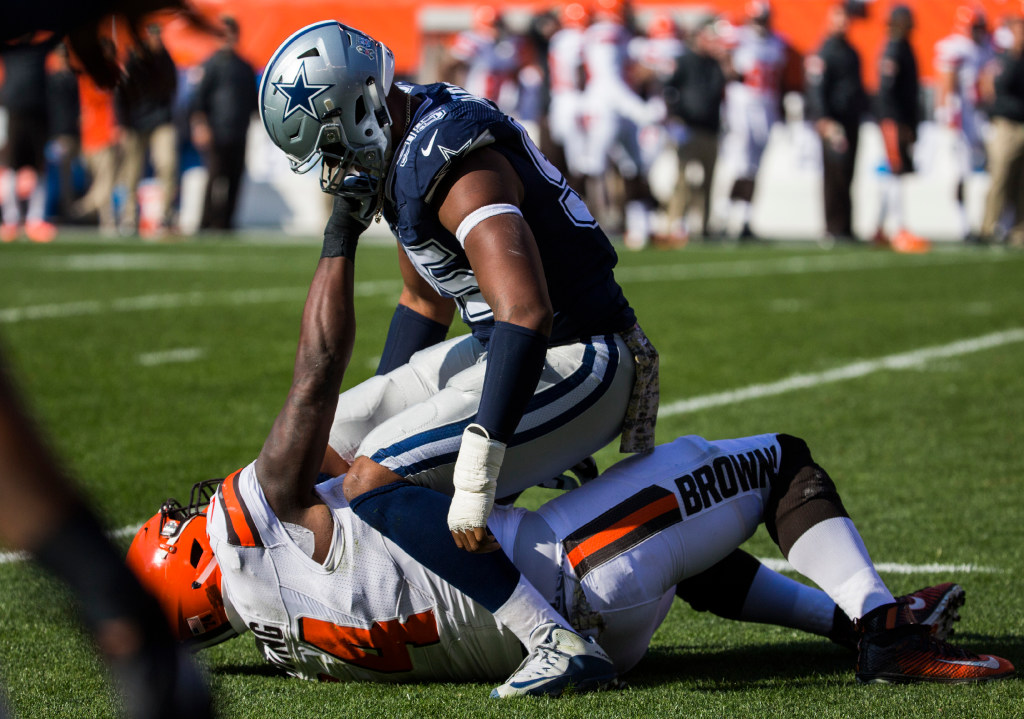 Now to the roster cuts —  The most notable cut on the team was QB Brock Osweiler.  The team parted ways with the $16 million dollar man after showcasing off in camp for trades.  They gave him a shot in camp to A) Possibly win the starting job or B) showcase himself for a potential trade.  Shockingly, he failed at both.  His $16 million dollar cap hit, coupled with miserable play made a trade impossible.  They cut his sorry ass and in a “you can’t make this shit up” move he re-signed back in Denver for $900 K.  So long Brock, we hardly knew ye.

On Saturday, the Browns were not done making moves.  Before the final cut they traded a 6th round pick to the Pittsburgh Steelers for WR Sammie Coates.  Not a flashy move by any means, but the Browns biggest hole at this point is  at the wide receiver position. Coates brings experience, size, youth, and potential to the Browns receiving corps.  Will he be a number 1 receiver?  Probably not. Coates will be given more of an opportunity to produce at more consistent basis than if he was with the Steelers.  Coates finished last year with 21 receptions, 435 yards,  and 2 touchdowns.  Coates started the season red hot before breaking multiple fingers mid-season his production fell off.

With these trades in place, the Browns cut down their roster to 53.  Lets take a brief look at the players that got the axe:

Nothing of note in the list of cuts, other than Osweiler.  Jordan Leslie flashed potential in this years final preseason game but ultimately Sashi Brown felt better with acquiring receivers through trade and the waiver wire.  One of the few positives of finishing dead last in the NFL is first waiver priority.  The Browns had their pick of all of the players waived around the league.  Sunday brought in the first crop of waiver claims.  The Browns immediately claimed Seahawks camp standout Kasen Williams.  He had stuck out throughout camp making highlight reel catch after highlight reel catch.  He presents a vertical deep threat for Kizer.  However, he is a bit slower than most receivers and not as polished a route-runner.  It looks like with Britt, Coleman, Coates, Williams, and Louis — the Browns will be able to stretch the field.  It is a patch-work receiving group, but there is potential for production.

In less than one weeks time, the Browns 2017 campaign will kick off against the Pittsburgh Steelers.  Based on the improvements seen on the field during the preseason, 2017 should bring a more competitive season.  The head says the Browns will win 6 games max, the heart says this is the year they’ll be 8-8/9-7.  Either way, in time I believe this team will be a playoff contender and I am more excited than ever to watch the Browns lose.