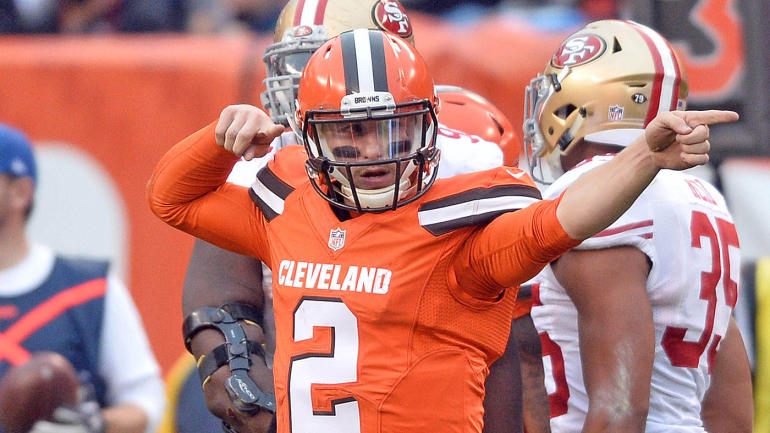 There goes that man, Johnny Fucking Football.  Johnny made some steps to a comeback yesterday when he took part in the University of San Diego Pro Day.  It doesn’t really mean all too much in terms of an NFL return, but it was nice to see Johnny in the news for something positive.  According to a multitude of outlets, 13 NFL teams sent a scout attend the event.  Keep in mind this was USD’s Pro Day.  This was mainly for USD prospects, so I would bet a number of those 13 teams were there more or less for those players, not Manziel.

Interesting to see what teams were in attendance.  The New England Patriots caused a stir when they brought Johnny inside to get an exact measurement.

Oh boy would that ever be interesting! I think the weirdest aspect of this whole event was that the Browns sent a scout to USD.  We paid a scout to watch a player we had in the building for 2 years, and no matter what happens he ain’t coming back.  I am going to assume the Browns sent their area scout for the other players working out.  If not, well then that’s just very Cleveland Browns.  Let’s pay a guy to scout a guy we had for two years less than 2 years ago.  Brilliant, Jerry!

Schefty here saying that it went well, which is great to hear.  Johnny has been ramping up the comeback train for the last few months.  He has a CFL Offer on the table (Hamilton Tiger Cats), and he is scheduled to play in a development league this spring.  It will just be a few weeks, but it will be a chance to see Johnny running around in pads again.  I for one cannot wait!

I may be alone in this opinion, but I loved Johnny when he was on the Browns.  It was a marriage that was never meant to be, but it wasn’t all bad.  Outside of one game (his debut against the Bengals) Johnny wasn’t half bad on the field.  In some games he actually carried the offense on his shoulders.  Problem was his top two receivers were under 6 ft tall.  He never got to work with Josh Gordon, and there was no running game support.  It was all Johnny running around, and slinging it.  He actually showed progression from year 1 to year 2 and that had me hopeful.  But alas, it wasn’t meant to be.  Off the field is obviously another story.  I still believe to this day that if he hadn’t gone off the rails (Boom. Roasted!) he would’ve developed just fine.

Here’s to hoping we get to see Johnny Football scramblin’ like Tarkenton again.  He puts asses in seats for good reason.  Can you imagine what this rinky dink flag football league coverage will be like this spring?