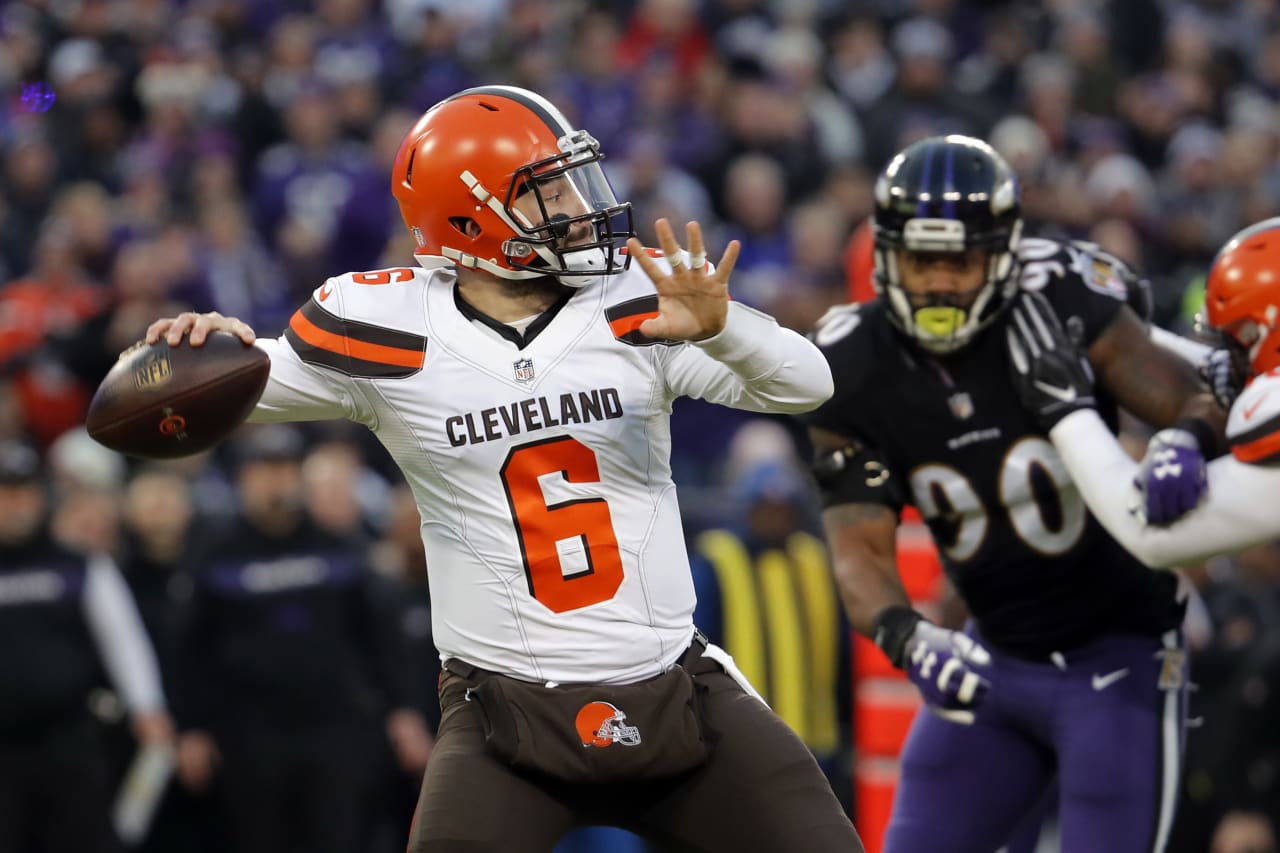 Well it’s Super Bowl Week, and in a stunning a turn of events, the Browns have already been eliminated.  That leaves the Rams and Patriots standing in Atlanta.  Sadly the Browns were eliminated quite some time ago.  Week 16 to be exact.  In Week 17 there was still hope of finishing the 2018 season with a winning record (8-7-1).  In a Week 17 showdown with Baltimore, the Browns fell 2 points short of achieving that goal.  The Ravens outlasted the Browns 26-24, with CJ Mosley intercepting Baker Mayfield on the final possession to seal the deal.  It wasn’t all bad for Mayfield, who threw for 375 yards and 3 Touchdowns.  Bakers third TD toss gave him 27 on the year, which surpassed Russel Wilson’s record for the most of any Rookie Signal Caller.

7-8-1 sucks, but clearly is an improvement from 0-16.  If the Browns ducks were in a row last summer, well I think we would’ve been playing at least one Playoff game this year.  Once the coaching dust settled, they showed just how good they could be.  They were one of the most efficient Offense’s during the second half of year.  They could run it down your throat with Nick Chubb, and sling the fucker all over the joint.  In the end, the Defense is just not where it needs to be for this team to reach the Postseason.  In the final game, Lamar Jackson ran for 90 yards and 2 Touchdowns.  Kenneth Dixon rushed for 117 yards, and Gus Edwards added 76.   While they were able to generate a shit ton of turnovers in 2018, the Browns Defense just could not get a stop when they needed it the most.  Priority number 2 this Offseason should be improving the Defense, especially the interior of the Defensive Line.  What is the reason this is only second on the Offseason “To-Do List”?  That’s because priority number 1 this Offseason was to find a new Head Coach to pair with Baker Mayfield. 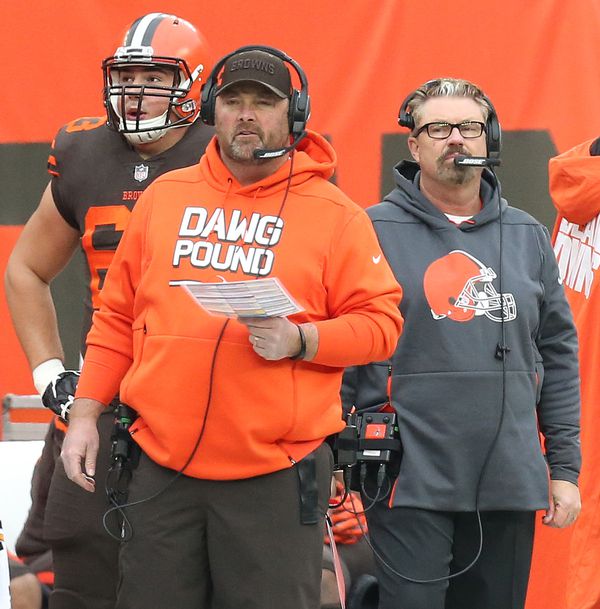 They wouldn’t have to look to far to find the 17th Head Coach of the Cleveland Browns.  With Sean McVay having so much success out in Los Angeles, and Matt Nagy having similar success in Chicago, every NFL team is trying to replicate that type of hire. These young, offensive minds have captured the hearts of desperate, stupid Owners.

In under two months, Kliff Kingsbury has been:

Kliff Kingsbury was hired out in Arizona, for reasons that confuse many. This guy choose Davis Webb over Baker Mayfield at Texas Tech, and was unable to win anything with Patrick Mahomes. He’s seen as this young genius, who has connections to McVay. The Cardinals went as far as to mention it in their Press Release:

You see where Arizona’s Head is at with this hire. They see those McVay connections, and history with Mayfield and Mahomes. It makes owners drool. They see high point totals and Kliff being the media’s darling like Sean himself. Problem is the dude finished under .500 at Texas Tech. Mediocre at best.

Kingsbury is just one example of this type of hire. The Jets hired Adam Gase, a mere few hours after he was fired by Miami. He too, is a young Offensive minded Head Coach.

The Browns interviewed a slew of mediocre Coordinators and former Head Coaches for the open position. Names like Jim Caldwell, Mike McCarthy, Gregg Williams, and Dan Campbell were interviewed. Josh McDaniels was linked to the job, mostly due to media speculation. Thanks to his Irish Goodbye from Indianapolis last year he never got an interview, while Patriots Defensive Coordinator, Brian Flores did. Despite having arguably the most attractive job open in the NFL, the Candidates were slim pickings.

All of these factors helped John Dorsey circle back around, and hire Interim Offensive Coordinator Freddie Kitchens as the teams 17th Head Coach. This comes as surprise, as Freddie was just a Runningbacks coach in August. He then was given the keys to the Offense when Todd Haley was told to screw. The results speak for themselves:

Under Freddie Kitchens, Browns are converting a 1st down before reaching 3rd down 31.2% of the time… just another of a never-ending supply of stats demonstrating how this offense is performing at an extremely high level pic.twitter.com/wfjvbYNshb

The Offense exponentially improved during the second half of the year with Kitchens calling the shots. The Browns Offense went from being one of the leagues most lackluster to most potent. Biggest tell for me is Red Zone Efficiency. From October on, the Browns were fucking money in the Red Zone. Mayfield was surgical inside the 20’s, so much so he was one of the better Red Zone passers in the NFL. You might think it’s easier to score in the Red Zone, but in the NFL it narrows your margin of error. You have to be even quicker, even more decisive in the Red Zone. Mayfield was just that and then some.

The Browns are betting on themselves with this hire. It is very rare a coach rises so rapidly within the ranks. Freddie has been in the league for quite some time, but he came from nowhere to be the most popular candidate. The one time Alabama Quarterback is loved by players and fans alike.

He is nearly impossible to dislike and or root against. Kitchens hails from Alabama, so naturally he’s got a deep Southern Drawl. He’s got a natural sense of humor at the podium.

That natural sense of humor is what helps Freddie connect so well with players. He clearly has a tight bond with Mayfield, and the whole team. He has this belief in the team, a belief that clearly translates on the field. Take a look at the second half of the year. The Browns were running trick plays to show off how good they were, they were breaking 90 yard Touchdown runs, and were slinging it 60+ yards to a first round bust (Perriman). Hell, if Alabama had not beaten Georgia in the SEC Championship, Freddie was going to let Nick Chubb call some plays in the Browns upcoming game. He was serious too. This sort of stuff was impossible for the Browns to ignore.

While I am definitely nervous about this hire, but there is definitely that slim chance this dude pops and the Browns explode to like 11-5 or something . I am certainly skeptical, but this is Dorsey’s guy which makes it all better. What do I mean by Dorsey’s guy?

Jimmy Haslam looks on today from the front row. Not on the podium pic.twitter.com/IOMiUZUzmp

Jimmy and Dee Haslam keeping their fucking asses out of Football decisions. That’s what i mean. They desperately need to keep watching from the sidelines, keep mouths shut, and sign fucking checks. Sounds harsh but these two do more damage than good. This is John’s team now. John, Alonzo, Eliot, and the rest of the old Packers boys should be making these calls. John Dorsey knows this. Seth Wickersham recently wrote just a fantastic Expose for ESPN on the Browns under Haslam. Regarding the Kitchens hire Dorsey states, “I flexed my muscles and got what I wanted”.

Dorsey paired a cabinet of solid Assistant Coaches with Freddie to help ease the transition.

Todd Monken is taking his talents from Tampa to Cleveland to be Freddie’s Offensive Coordinator. Monken comes of high regard, and was Interviewed for numerous Coordinator AND Head Coaching gigs this Offseason.

Monken is an aggressive coach, who’s philosophy revolves around the Air Raid system. His teams are aggressive, and it showed with Buccaneers this year. Monken is coming in to run the offense, but not call plays. That will still be Freddie’s bread and butter.

Freddie Kitchens keeping offensive play-calling duties as head coach is not a concern for the #Browns #DawgPound https://t.co/tlKvVsS2rL

On the Defensive side of the ball, Steve Wilks was brought in to run the show. Wilks spent the 2018 Season as Head Coach of the Arizona Cardinals. His team was an absolute train wreck. They gutted the roster before he got there, basically hanging the dude out to dry. Wilks is most known for being the Carolina Panthers Defensive Coordinator. If anything, Wilks will be able to help guide Freddie through the Up’s and Down’s of being a Head Coach in the NFL. Gregg’s Defensive scheme had gone stale, and was masked by the unit generate a shit ton of turnovers. Wilks is a highly regarded Coordinator, and the Browns are hoping he can take the Defense to another level.

All that’s left now is to wait for the League New Year for any sort of news. March 13th will be the day Free Agency opens up. Big John has stated he doesn’t have any Jaw Dropping plans, like last years flurry of Trades and signings.

I tend to agree with that stance from Johnny. There aren’t really any Free Agents out there that tickle my fancy. A list of the top NFL Free Agents ranked by Pro Football Focus can be found here. Obviously there are a few names that stand out. Demarcus Lawrence certainly tickles the fancy, but the Cowboys are likely going to re-sign him. Trey Flowers is another one that moves the needle. If he hits Free Agency odds are he won’t want to leave a perennial winner in New England for Cleveland. Still, there are a few D line options the Browns could go after to bolster the Run Defense and Pass Rush.

Shaq Barrett is one to grab on the cheap, as Bradley Chubb outshines him out in Denver. The Browns have been interested in the past, but never got anything done. Maybe they take a flyer? Other than that nothing appeals to me. It’s an older Free Agency class than what we normally see.

2018 being over sucks. I have major Blue Balls for next season. I am not going to sit here and guarantee playoffs or anything though. The Browns are the Browns. Usually when they make strides the next year is hell. While I feel comfortable with Mayfield and Dorsey, it’s still going to be interesting to see how the teams builds of the late season success of this year. Fingers crossed.