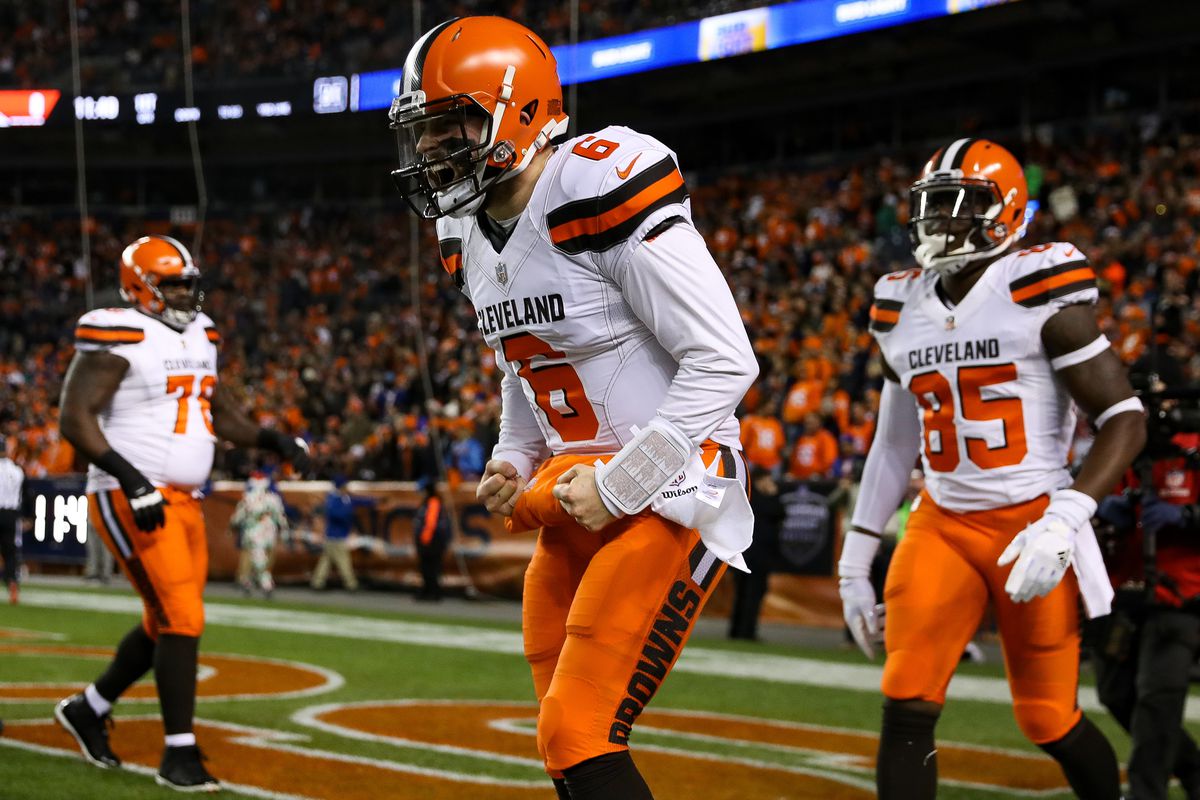 After getting their tails kicked in by the Texans three weeks ago, the Cleveland Browns have once again won 2 games in a row.  They took care of the Carolina Panthers 26-20 to improve to 5-7-1, and they took down the Denver Broncos at Mile High, 17-16.  The Browns are so very close to .500 at 6-7-1, and even still have a small chance to make the playoffs. Small chance is being a bit generous too, considering they’ll need a Colts and Titans tie in week 17.  Safe to say the Browns late season push will be for not, but  Its week 16 and they have not been eliminated.  Normally this is pathetic to be proud of, but it sure beats the alternative:

The horror of 0-16 seems like forever ago.  Watching Saturday night showed many what is coming in the future.  A team that is only going to get better.   The Browns have a supremely athletic Defense that is opportunistic, and Offense that can run the ball down your throat, and pick you apart in the passing game.  Most importantly of course is the Quarterback, which is now in place.  Baker Mayfield has been nothing short of fantastic.  He was amazing at Mile High, which is right up there as the toughest place to play in the NFL.  Combine those sicko fans and noise with altitude, and your hard pressed to find a tougher place.  The Bronco’s aren’t the same as they once were, mostly on Offense.  Gone is Demaryius Thomas, hurt is Emmanuel Sanders, and Case Keenum simply sucks.  They still have as good a pass-rush as anyone in the NFL, sporting Bradley Chubb and Von Miller.  The secondary is not what it used to be in their Super Bowl Days when they had Chris Harris Jr, Aqib Talib, and TJ Ward.   Even so, they were hanging to a thread in the playoff race just like the Browns.

The Browns did not wilt.  In what was a sloppy affair between two mediocre teams record wise.  Baker Mayfield was fantastic on the Opening Drive.  On 3rd and 9 from the Denver 31, Mayfield found Breshad Perriman around the goal line:

Phenomenal throw and catch.  Perriman has been just about as good as you could hope for.  All the Browns did was take a flyer, and this dude makes at least one huge play a game.  No more than 2 catches a game, but its always a deep bomb, a clutch 3rd down catch, or in this case a touchdown.  Things were looking good for the Browns, but they hit a bit of a lull for pretty much the entire first half.  After the opening Touchdown drive the next 5 possessions went: Punt, Punt, Field Goal, Punt, Interception.  Luckily for the Browns, Case Keenum and company didn’t fair much better.  They were able to match Perriman’s match touchdown at least:

Keenum's TD run was a matter of inches. Myles plays the run first, then redirects to get after Keenum but his swipe misses Keenum's feet by the smallest of margins and he scores. #BrownsFilmBDN pic.twitter.com/l5W8hSZnHP

The second half wasn’t much more exciting, as both teams continued to struggle on Offense.  Mayfield added a fumble to his early interception, while Keenum threw his second pick of the afternoon.  Despite the sloppy play, Mayfield lead a march into Denver territory early in the 4th.  Finally, on 1st and Goal from the Denver 2, Mayfield found Antonio Callaway on a quick slant for six.

With the Browns up 17-10 late in the 4th Quarter, the Broncos added a 29 yard Field Goal from  Brandon McManus to cut the lead to just one point.  Sounds great and all, but this was 4th and 1 from the Browns 11.  Knowing how good the Browns are running the Football, why on earth would you kick?  You HAVE to go for it.  Sure enough the Browns managed drive the ball all the way into Bronco territory. They were looking to pretty much kill the game.

HUGE STOP FOR THE @BRONCOS! 💪

Just awful.  With an easy chip shot within range, The Browns really wanted to ice a win by going for it on 4th and 1.  I love the ambition, as normally I would go for this every single time too.  4th and 1, in December, at Mile High? Kick the damn ball, or if you go for it keep the ball in the hands of Mayfield.  The Broncos sniffed out the Chubb run before he could even blink.  Just like that, the Browns would have to keep the Broncos out of Field Goal Range.

Jabrill Peppers comes through with the game-winning sack! 💪

Just like that, the Browns were a scorching 6-7-1 on the year.  Don’t let the Browns get hot!  In terms of the playoffs, the Browns are done.  Nearly every team the Browns needed to lose…won.   They are not eliminated from Wild Card contention, but are from the AFC North thanks to the New England Patriots.  The only scenario in which the Browns could sneak in involves needing a tie.  That means its over.

That doesn’t matter much to me though, as I never expected them to make the playoffs.  How could I?  I am more excited about the team firmly sitting in the teens for this Springs draft.

The Browns sit at 16th.  Still hanging on in the Wild Card race by a thread with just two weeks remaining?  I’d say this season is a success.  This weekend the Browns will host the Cincinnati Bengals in their final home game of 2018.  The Browns are eager to take a few more shots at their ex-Coach.

The Browns are a staggering 9 point favorites heading into this one.  I genuinely feel like this one shouldn’t be too much of a problem for the Browns.  Jeff Driskel will be starting for Marvin’s gang.  The Bengals defense is absolutely terrible, so Mayfield and company should feast.  Look for more growth from players like Njoku and Callaway, who turned the switch during the second half of the year. Lets finish this thing the right way with two wins to finish 8-7-1.