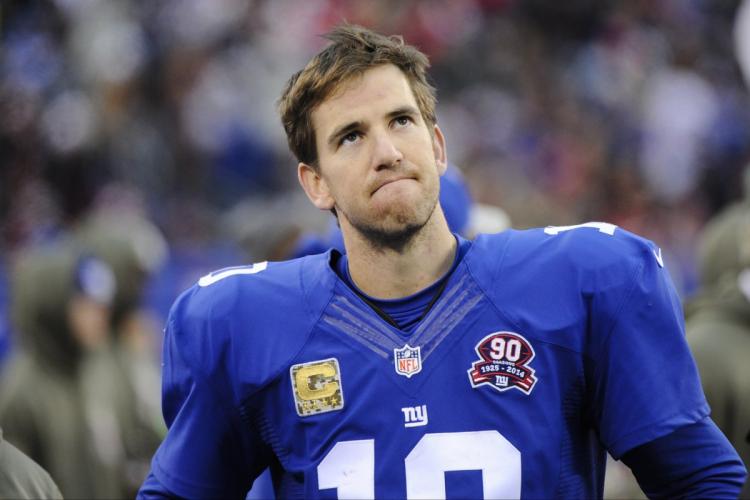 For the first time in 13 years, Eli Manning will not be the starting QB for the New York Giants. Who is their backup you ask? Well…

Geno Smith everybody. What a fantastic idea by Coach McAdoo. As if he wasn’t digging his grave already, he goes and makes Geno Smith the starting QB.

Manning was given the option of starting against the Raiders to keep the streak alive, but declined.

“Coach McAdoo told me I could continue to start while Geno and Davis are given an opportunity to play,” Manning said. “My feeling is that if you are going to play the other guys, play them. Starting just to keep the streak going and knowing you won’t finish the game and have a chance to win it is pointless to me, and it tarnishes the streak. Like I always have, I will be ready to play if and when I am needed. I will help Geno and Davis prepare to play as well as they possibly can.”

Have to give credit to Eli here. The Giants only have two wins and have severely under-performed and Eli takes some of the brunt of that. I totally understand why he wouldn’t want to be benched mid-game and would rather just let the other two play to save face. Have to wonder here if this is the last time we see Eli in a Giants uniform, with rumors swirling that Coughlin would like to have him back in Jacksonville.

Giants GM Jerry Reese on the benching of Eli Manning: "This is not a statement about anything other than we are 2-9, and we have to do what is best for the organization moving forward."

Sounds like the Giants are ready to move on without him if they see any promise from either of these back-ups (they won’t). Manning finishes 87 games short of Brett Favre’s all-time QB starts in a row streak at 210.