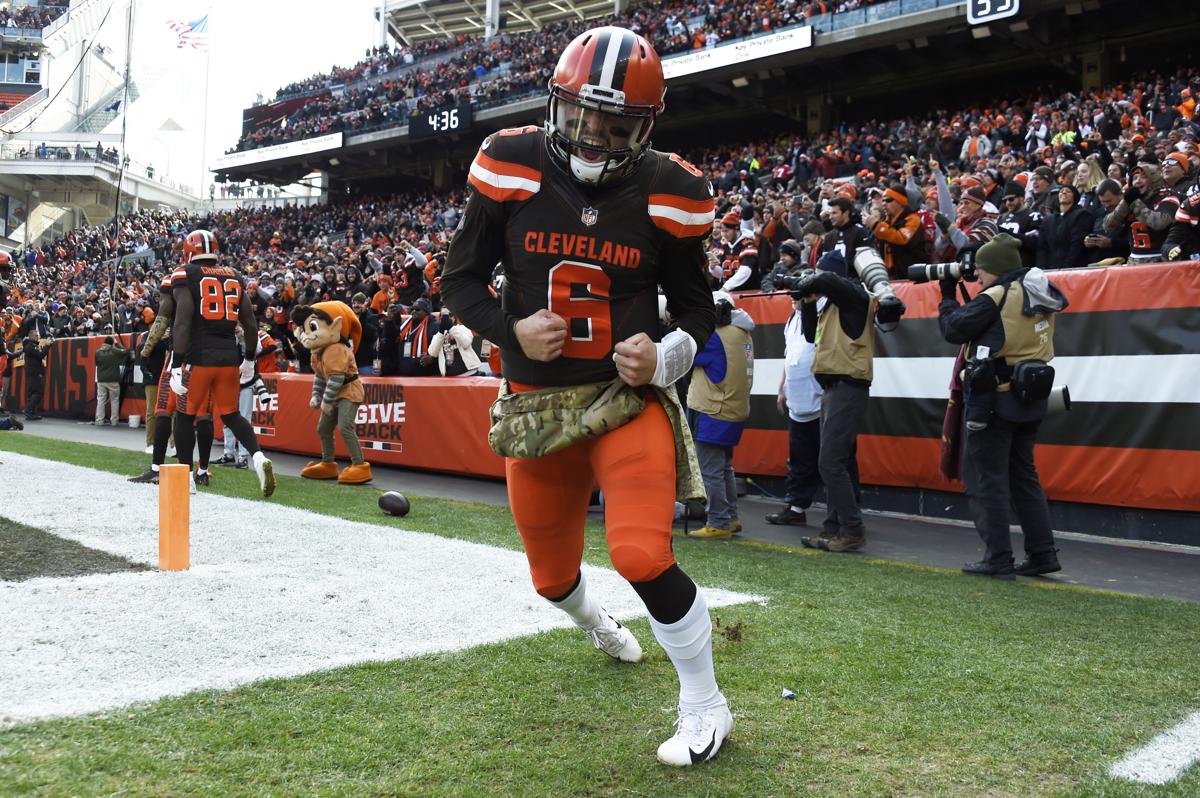 Fuckin’ right!  For the first time in years (seriously its been like 3-4 years), the Cleveland Browns beat an opponent soundly.  No barely made field goals as time expired, or a stop on the final drive.  The Browns took a multiple possession lead into the fourth quarter, and closed it out.  The Atlanta Falcons were red hot coming in, having won three straight games.  Didn’t matter on this day, as the Browns finally had their Offense AND Defense clicking at the same time.   The win was a nice glimpse into the future, as two Browns Rookies shined the brightest.  Nick Chubb and Baker Mayfield electrified FirstEnergy Stadium.  For the first time in years, the whole Browns roster played a complete game on Sunday.  Wow that feels good to say!

I was expecting another loss coming into this one, considering Atlanta was coming in hot.  Stupid of me considering the teams they beat consisted of the New York Football Giants, Washington Redskins, and the Tampa Bay Buccaneers. The Browns were coming off an ass-kicking, courtesy of the Kansas City Chiefs.  Didn’t matter on this Sunday, as the Browns showed they were ready to play from the get-go.

Both teams exchanged punts to start the game, but on their second possession, the Browns started to march.  Mayfield got it going with a nice 16 yard catch and scamper by Breshad Perriman.   Two plays later from the Cleveland 30 yard line, Mayfield fired an 18 yard strike to David Njoku, and I am still not sure how this dude caught it.

And Njoku bringing this in against a tight catch window is great to see. pic.twitter.com/LRZn3zluJr

Just an unreal throw from Baker, and a shockingly good awareness/hands from Njoku.  Certainly not one he usually catches.  A 13 catch and run by Nick Chubb, and a 10 yard reception by Jarvis Landry had the Browns at 1st and 10 from the Atlanta 28 yard line.  Magic ensued as Mayfield took a shotgun snap, rolled to his right, and fired a 28 yard strike to a leaping Rashard Higgins.

Just an awesome drive, capped off by Mayfield’s best throw of the afternoon.  Rolling out to his right, pressure coming up the middle and on the edge, and he fired a pill off his back foot.  Just an awesome throw, one Cleveland Browns fans are not used to seeing.  A nice 7-0 lead for the Browns.

Just as you might expect, the Atlanta Falcons came right back down the field on their ensuing possession, as Giorgio Tavecchio nailed a 40 yard field goal.  It capped off a long 15 play, 53 yard drive.  On the ensuing Browns possession, things were looking great again, until Freddie Kitchens got a little too excited.

.@DamontaeKazee saw that pass coming like he had binoculars! pic.twitter.com/M3YQuNZgeA

AHHHHHH fuck guys!  A nice 6 play drive had gotten the ball into Falcon territory, and the Browns got cute.  Never get cute if you’re the Browns.  Coming out in sort of variation of the Wishbone formation, Dontrelle Hilliard (lined up to Mayfields left) took a quick hand-off, and Mayfield took off to the flat on the left sideline.  Hilliard reared back and threw a duck to Mayfield.  It was easily picked off by Damontae Kazee, who ran it back to the Cleveland 45 yard line.   I have no problem with these gadget plays when you’re struggling to find some offense and need a spark.  The Browns were moving the ball at will, and got a little cocky when they didn’t have to.  Six plays later, Matt Ryan found Julio Jones for six.

This is where you start to groan and say, well that’s it!  A costly turnover which the Falcons capitalized on to take the lead.  Its all down hill from here, right?  Wrong.  The Browns responded with a mesmerizing 8 play, 80 yard march to pay-dirt.  On 2nd and 13 from the Atlanta 13, Baker Mayfield found Nick Chubb on a beautifully set up screen pass.  Chub waltzed into the endzone from there.

Beautifully set up screen pass by Mayfield, who stood tall selling all of the fakes.  Even better job by the big uglies on the offensive line.  They set up a nice wall for Chubb once he caught it, and they sealed off the only free would-be tackler.  The Browns would head into half up 14-10.  Baker finished with a perfect passer rating.  Unreal, it’s so beautiful I nearly shed tears of joy.

The Falcons would open up the second half with the ball, looking to take a lead.  Instead, on the third play of the half, Mohamed Sanu coughed up the ball, and the Browns recovered in Atlanta Territory.  Six plays later, Duke Johnson caught a Baker Mayfield check-down, and waltzed into the endzone, similar to Chubb.

So now, I am trying not to get excited.  A two possession lead is normally this teams Kryptonite.    I was fully expecting Atlanta to make it 21-17 on their next possession.  The Browns had other ideas, as they forced Matt Ryan and the Falcons to go three-and-out.  When the Browns got the ball back, they were pinned deep.  Starting from their 8 yard line, I was hoping for a long, clock killing drive.  Nick Chubb said “fuck it”

On 2nd and 8 from the Cleveland 8, Nick Chubb exploded through the line of scrimmage, and it was over from there.  92 fucking yards, and the Browns were up 28-10.  Unbelievable.  Shout out to Antonio Callaway on this play, who I give a lot of shit to.  Helluva play here.  Nowadays everything is damn penalty, so he directs Chubb to the left, and merely creates a moving screen.  Thankfully that Sally did not want any part of engaging Callaway, or trying to tackle Chubb.  Callaway merely stood in the way.  No stupid penalties taken.  The best play Callaway has made all year, and I mean that.  It was a smart, heads up play.

It was 28-10 for the majority of the 4th quarter, as the Browns were trying kill the clock.  So were the Falcons apparently, as they marched at their own pace.  The Falcons marched inside the Cleveland 10 twice in the fourth Quarter.  One trip resulted in a turnover on downs:

The second trip into the Redzone resulted in a Matt Ryan touchdown pass to Austin Hooper on 4th and goal.

BLAH.  Shoulda made that tackle.  Shoulda, coulda, woulda though.  The Browns would in fact sack Ryan on their 2 point conversion attempt, keeping the score at 28-16.  The Falcons would get the ball on last time, and the game ended on sack fumble recovered by Jamie Collins.

When the Browns want to be, they can play with anyone, and they can beat anyone. We are finally starting to see some more disciplined play, since the departure of Hue Jackson.

Since Hue Jackson’s firing…#Browns have 4 penalties.

OH you don’t fucking say?!  Only 4, huh?  Funny how that works.  Remove the common denominator, and good things happen.   Credit to Gregg Williams, as he as instilled far more Football discipline than Hue.  It seems to be a huge problem for Jackson as this same issue constantly plagues the teams he’s coached.

The Raiders committed the most penalties in a season (163) in NFL history, perhaps a factor to head coach Hue Jackson's dismissal.

The Browns are off this week, which sucks because you want them to try and ride the momentum of their win.  Two weeks off is dangerous, because they are gonna be hearing how great they are.  Hopefully they continue to build off this win, and don’t get complacent during the Bye week.  The Browns next game will be in two weeks time, in Cincinnati.  Cincy is coming off getting bent by the New Orleans Saints at home to the tune of 51-14.  The Browns can beat these fucking bums.  With two weeks to prepare, I would hope the Browns take advantage of the reeling Bengals, who fired there Defensive Coordinator this past Monday.

More incentive to beat the fucking pulp out of these guys.  Less than two weeks after his firing, Hue Jackson took a Dwight Schrute esque role with the Bengals.  He did a media tour saying “WOE IS ME” and “NOT MY FAULT”, and then takes a job with his soulmate Marvin Lewis.  I have never wanted a win more.  I wouldn’t hate him so much if he had just shut his fucking mouth.  He’s the only coach to basically go on a media tour to plead for another job.  A media tour in which he blamed everyone but himself.  I hope the Browns see this, and get ready to bury that motherfucker.

Says it all right there.  So much lack of respect.  I love it.  I bet there are many more Browns players who feel the same way, and we just don’t know it.  Either way, Hue’s return has made this match-up in two weeks more interesting.  It has certainly made for some classic, memes,  gifs, and other internet jokes.

Hue Jackson running back to the Cincinnati Bengals like pic.twitter.com/aRuy06HmFL

Congrats to Hue Jackson on being named Special Assistant to the Head Coach today in Cincinnati. pic.twitter.com/EwYLBvXAct

Maybe the Bengals are hiring Hue Jackson because they have two games left against the Browns this season and they need someone with experience slowing Baker Mayfield down on the football field.

Two weeks to prepare for this fucking guy.  Two weeks.  Lets hope the Browns build off this last week, and add a few more wins to the total.  I do not think they are going to make a legitimate run at the playoffs this year.  The problem with the Browns winning is…people tend to overreact to them.  It happens so little, every time they win we see articles and tweets about Playoffs.  Could they?  Sure. Will they? You know the answer to that.  They can definitely still play spoiler for other teams like the Bengals and Ravens.  Just enjoy the win for two weeks, and lets see what they’re made of coming out of the Bye.

“When I woke up this morning, I was feeling pretty dangerous” – @bakermayfield

There are seven weeks left for these teams to make their move. pic.twitter.com/DR81fYpzlj