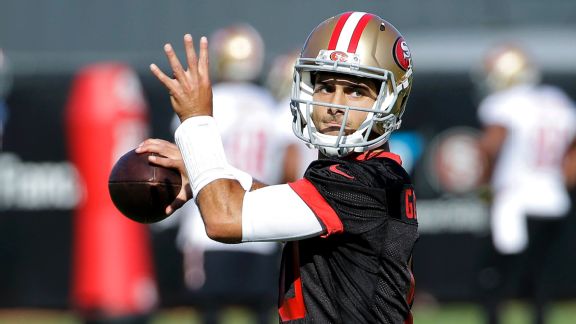 The trade deadline came and went, leaving us with perhaps the most exciting one in years. The big one that dropped Monday night, a day before the deadline, was the move made by the New England Patriots for a second-round pick from the San Francisco 49ers.

Huge news from the Patriots regarding the supposed heir to Brady’s throne. Garoppolo had been pumped up by Patriots fans to be the next franchise QB once Brady finally throws the towel in. After playing 100 snaps and looking solid last year, he went down with an injury — which led to Brissett and then back to Brady and we all know how last year ended. Brady has been on record saying that he wants to play atleast 4 more years, and still looks really good (leading the NFL in passing yards after Week 8). However, he is 40 years old and age will eventually catch up to him — that or Giselle making him stop.

Regardless, Garoppolo has always been highly touted and keeping him through the draft last year while the rumors were floating around certainly made people scratch their ends. Garoppolo is at the end of his contract and it was highly doubtful that the Patriots were going to be able to provide him with the money and the opportunity that another team would be able to. However, he stayed on the roster as Brady’s only backup when the Brissett trade happened — furthering the belief that the Pats thought this was their guy.

Then the news broke — a second round pick from the winless Niners (which is pretty much the same as a late 1st rounder at this point) for a potential franchise QB. I don’t hate the move from the Patriots view — they were going to be put in a tough spot in the offseason with the potential for Jimmy G to leave without them receiving anything. It’s probable the Pats have their eye on a QB in this draft. It’d be very surprising to see them not to take a young QB considering the only insurance policy is now Brian Hoyer.

For the Niners, I think this is a great move. They’re going all in on a young, potential franchise QB to pair him up with their young coach. Although the talent isn’t necessarily there, other than Carlos Hyde, this is the right move to start to build up. CJ Beathard wasn’t going to provide you the victories that you strive to have as part of a historically good organization. Garoppolo gives you that chance. At this point, the Niners are going to have a solid draft pick so they can look to provide him with the talent that’s necessary. Historically, almost everyone traded by the Patriots never seems to quite pan out as expected but the Niners taking this chance was a good move.