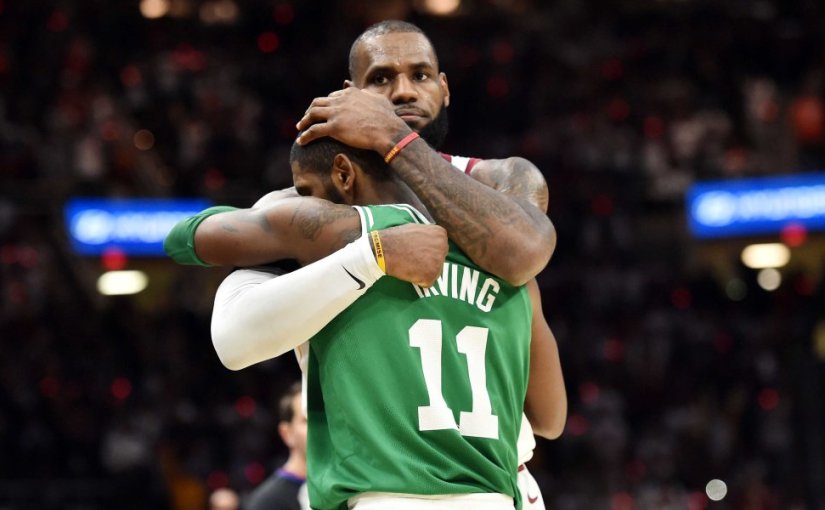 Opening night in the NBA did not disappoint. An off-season filled with excitement and interest carried over to Tuesday night. Unfortunately the night began with sadness. Less than 6 minutes into the first quarter, Gordon Hayward came off a back screen alley-oop attempt, flew through the air, came down off balance and awkwardly landed on his ankle. As he spun himself on the ground, we were shown the horrific scene — his ankle was facing the wrong way. After the game, it was reported that he had dislocated his ankle and had a fractured tibia. He was stretchered off the court and has been brought back to Boston for further testing and surgery.

After that gruesome injury, the Celtics were in a daze and the Cavs out-scored the Celtics 45 – 26. At halftime, it was reported that Gordon Hayward stuck around to see his teammates during the half to let them know he was okay. Knowing that Hayward was okay, the Celtics came out out red hot and by the end of the third they were able to come within 1 point, nearly erasing a 19 point deficit.

The 4th quarter was pure electricity — each team trading the lead multiple times. In the end what did the Celtics in, was a corner three from Kevin Love with 46 seconds left.

Although the Celtics started the season off with a loss, there were a few positive take aways.

The first has to be the fight that this team has — only having 4 returning players from last years 53 win team and only 1 starter, we weren’t sure what to expect from this team.

Although losing Gordon Hayward will hurt the C’s, his injury will provide more playing time for Jaylen Brown and Jayson Tatum. Two young players who played very well last night. Jaylen scored 25 points, had 6 rebounds and 2 steals. Jayson also had played well, after having a shaky first half which is expected from a rookie playing his first game, he still recorded a double – double 14 points and 10 rebounds. These two players have been given a great opportunity — lets hope they don’t blow it.

We all knew this was Kryie’s team, but now because of the injury he will be looked to even more on and off the court. He will be asked to score more than he has ever scored before and as it stands the season rests on his shoulders.