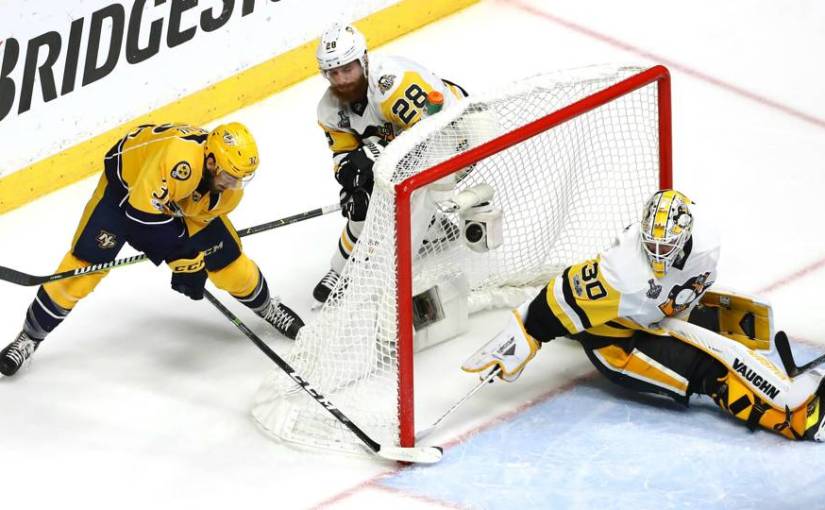 The Nashville Predators took game 4 of the 2017 Stanley Cup Finals, evening the series at two games a piece on home ice in the Music City.  On what will go down as one of the biggest home ice advantages in recent memory, the Predators have completely changed the tune of the series.  After losing games 1 and 2 on the road, the Preds have stormed back, winning games 3 and 4 by a combined score of 9-2. Bridgestone Arena has been absolutely rocking, and it seems as though this momentum will carry with them on the road in Pitt.

Calle Jarnkrok opened up the scoring with his second goal of the 2017 playoffs, netting the puck with about five minutes remaining in the first period.  Less than 2 minutes later, Sidney Crosby and the Penguins tied the game on a breakaway backhand goal. Crosby’s first period tally gave him his first SCF goal in 19 games.
Pekka Rinne has risen from being yanked in game 2, to carrying the upstart Predators on his back as he has done through the majority of the Playoffs.  He made 23 saves total. None were bigger than his acrobatic effort to rob Pittsburgh’s Brian Rust and Jake Guentzel of scoring the go-ahead goal early in the second. Rinne Save

The feisty Predators took the lead a few minutes after Rinne’s miraculous effort. Frederick Gaudreau, the AHL call-up, snuck a wrap-around goal just underneath the stick and blocker of Matt Murray.  Initially ruled a save on the ice, the play was blown down as the “NHL War Room” in Toronto blew the horn to signal a review of the play. Viktor Arvidsson and Filip Forsberg finished off the scoring to complete a 4-1 victory.

Going into this series, I had the Penguins winning in 5 games because of Sidney Crosby, Evengi Malkin, and Phil Kessel.  Along with those three studs, they have great forward depth.  Mike Sullivan has been able to plug in younger guys like Brian Rust, Connor Sheary, and Jake Guentzel to compliment their super star fire power.  Defense is a definite weak spot with the Pens, but having two proven goalies in Matt Murray and Marc Andre-Fluery helps stabilize that.  It just seemed that the forward depth of the Predators would be too weak to overcome the defending champs.

Late in the Western Conference Finals, the Predators lost their #1 Center Ryan Johansen for the duration of the playoffs due to a “thigh injury”.  Looking like this was the end of the road for the Preds — they managed to plug guys in and out of the lineup with massive success. Credit to Head Coach Peter Laviolette, and General Manager David Poile, who’ve built an exceptional program in Nashville.  They have guys like Gaudreau scoring massive goals in the SCF, after only dressing in 9 regular season games.  Mix in some young fresh forwards with some savvy veterans like James Neal, Mike Fisher, Craig Smith — you’ve got a solid grind it out forward group.  The fire power may not match the Penguins, but they can certainly wear down their weakened D corps.  The defensive corps for the Predators on the other hand is absolutely outstanding and easily one of the best in the league.  Josi, Ellis, Ekholm, and Subban can not only shut you down, but also put the puck in the net.

The series continues Thursday night at PPG Paints Arena in Pittsburgh.  The Predators look to make it three wins in a row, and the Pens look to bounce back on home ice. The longer this series goes on, the more it looks like its going 7.  I certainly will not be complaining about that one bit.